There isn’t much that can be said about Yosemite that hasn’t been said before. We’ve seen the crisp black and white photos of Ansel Adams and the vivid color of the Apple desktop background on Macbooks throughout the world. Yosemite needs no introduction.

I grew up in Southern California. The only notion of family vacation that I was aware of involved pulling a Starcraft pop-up trailer to the Eastern Sierra Nevada mountains and trout-fishing for seven days in the summer. The Eastern Sierras are just a stone’s throw from Yosemite – over a seemingly impenetrable fence of peaks. They are the other side of Ansel Adams’ work. The dry, barren, mountain range jutting out of a desert. A closer look at those peaks revealed mighty pines in the high valleys that caught the snowmelt before the leftover water was captured and diverted to Los Angeles. Coming up Highway 395, I knew we were getting close to our destination by the arid, pink, “bottomless” Owens Lake, whose only shimmer was a mirage of heat over the rainbow of minerals left behind. Mt. Whitney stood, unassumingly in its row of fellow 14,000 ft. peaks, unwilling to boast that it is the highest point in the continental United States. For one week every summer, those were my mountains.

At an early age I noticed on a map that Yosemite was not that far away. Not realizing that there was no direct road to get us there, I asked my dad, “Can we go to Yosemite this summer?” I’m sure my dad’s answer was brief (he’s brief when you want information, long-winded when he’s telling a yarn – a trait Monica says I’ve inherited). All I knew was that we didn’t go to Yosemite because of the summer crowds. That answer was good enough for me until just a few years ago, when Monica scored us a tent/cabin-like dwelling in Yosemite Valley in late May. I was almost 40 when I first visited Yosemite, and even with moderate crowds, it was magical.

Summer 2018 would mark our second visit to the park. At the end of our last post you heard about how we made a last minute change to our plans and traded 3 nights in a Half Dome Village tent, for 5 nights dry-camping in Tuolumne Meadow (8 miles away by mountain trail, 50 miles by car). Tuolumne Meadow is on the east-side of the park, higher in elevation, and seldom-visited by the typical visitor approaching from San Francisco/Sacrmento/LA. Tour buses don’t got there. You can’t even get there by car in the winter or much of the spring (the campground had just reopened for the season when we arrived.)

The difference between the crowds in Tuolomne Meadow vs. Yosemite Valley is this: 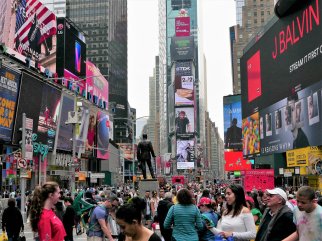 The Tuolumne Meadow campground is spacious, and certainly not all sites felt as secluded as ours, which backed up to a forest hillside. But even the “bad” sites are wonderful. (I’ve explored some campsites in Florida that are so close together they ask you which side your RV slide-out is on so you don’t bang into your neighbor.) The namesake meadow is breathtaking. Over 150 acres of it was originally owned by the Sierra Club and used as a summer getaway. The elevation brought cool nights in the 40s and perfect afternoons.

Admittedly, if your goal is to visit Half Dome and El Capitan, you’ve got a long and winding 90 minute car ride through some amazing mountain landscape to Yosemite Valley. We made the trip twice during our stay and I’ve got some serious advice for you: Don’t go on the weekend in the summer. It’s just not worth it.

Rather than try to paint a picture of our visit, I’ll just show you: 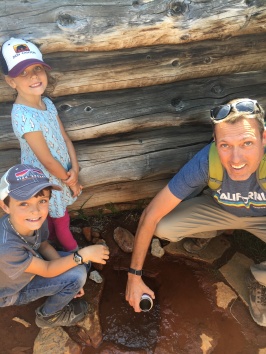 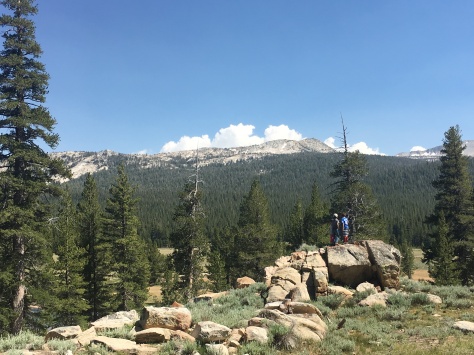 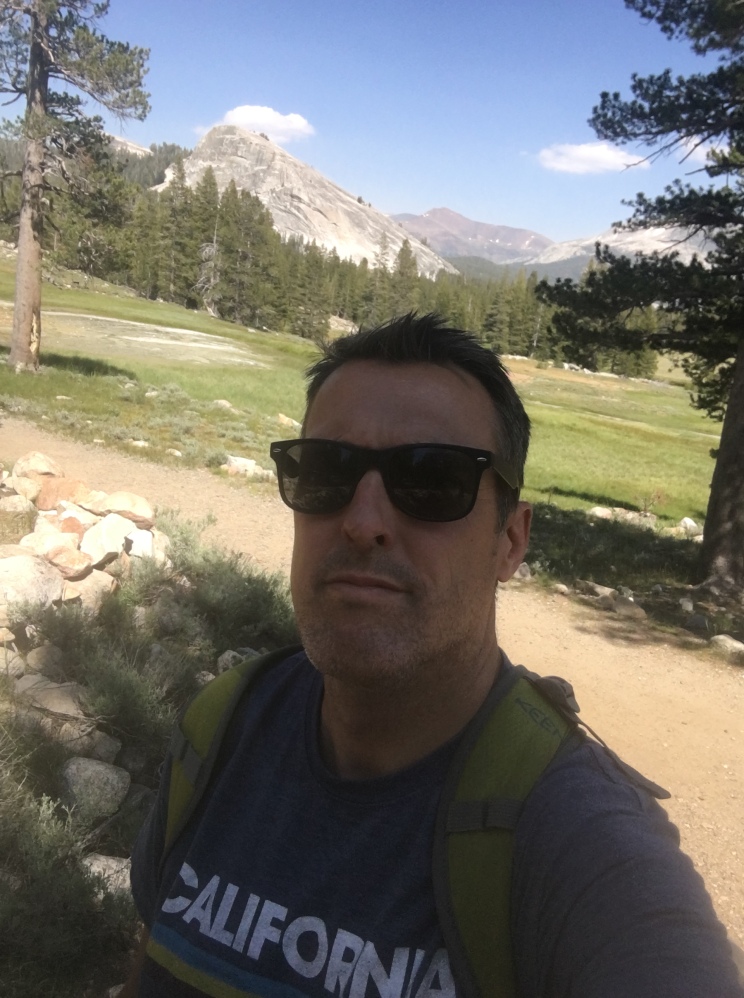 Top row: Our campsite in Tuolumne Meadow Campground backed up to … no one. We followed a trail to Soda Springs where (second row) we scooped up a little of the spring water bubbling out of the mud. It’s carbonated! Tasted like metallic seltzer. The meadow offers a beautiful, flat, grassy valley to explore easily. Best of all, no crowds. 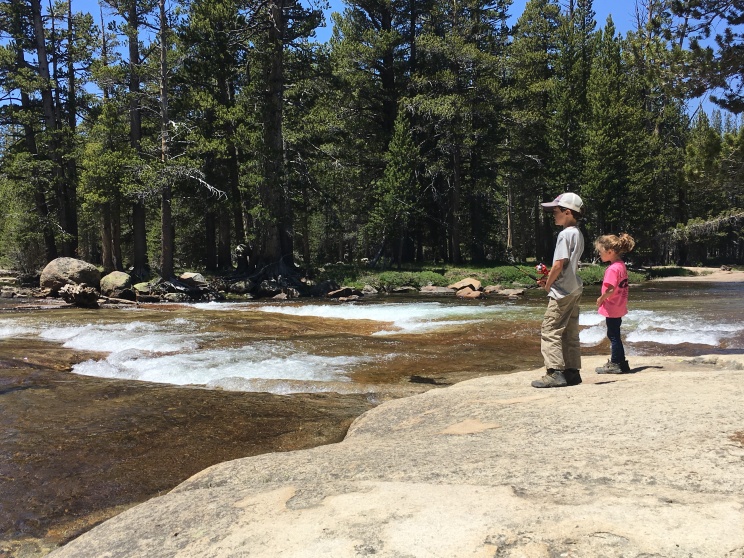 Did I mention the picturesque river? The kids threw in a line, but the trout didn’t like our Florida lures. Monica took a hike while I settled in with a book.

This is a good time to mention again the backpack I use. I’m 6’3″ with knees and elbows akimbo (Monica’s frequently used word). My femoral arteries have been accessed through my groin and thighs for vascular surgeries more times than I can count. My right thigh is numb from my knee to my waist. I don’t like sitting on the ground and I can’t sit crosslegged. This discontinued Keen backpack folds out into a back-supporting seat for relaxing on the ground. Sometimes I carry it empty, just for the chair feature. I’m in no way affiliated, nor have I ever communicated with Keen. But I do think they should resurrect this model of backpack. People ask us about it wherever we go.

The camp store in Tuolomne Meadow is a way-station along the Pacific Crest Trail – popular with backpackers who resupply, receive packages, and – charge their phones. Each night, campfire programs told the story of the park. On the second night, three park-ranger troubadours offered a history lesson in Americana folk music dating back to the mid 1800s. I can’t express how special this experience was. The National Park Service maintains the parks and communicates their importance in such a thoughtful, intelligent and caring way. I honestly can’t think of a better way to spend a tax dollar. (OK, maybe universal health care… then parks.)

As I mentioned, Yosemite Valley is only 8 miles away, and a unique view of Half Dome from the opposite side, is just a few miles down the road. But it takes 90 minutes to drive there. The road passes a trail leading to a grove of giant sequoia trees. We made our way down to the Valley mid-week so I could take our girl to an art class, while the other half of the family hiked to a waterfall.

It’s chilly at night at 8,000 feet, causing Monica to don nearly all of her clothes – including the famous Jolly Green Giant tights I once bought her as pajamas. We returned to the Valley on a Saturday because we had reserved a raft for a leisurely float down the Merced River. The float was relaxing and serene. The Disneyland-like crowds off the river were not. It was the Saturday before July 4, and it was really an awful day to see the park.

The Merced River is fed mostly by melting snow – so it isn’t exactly warm. But you can’t be dry for your waterfall picture. Monica perpetuated the age-old lie, “It’s great once you get in.” 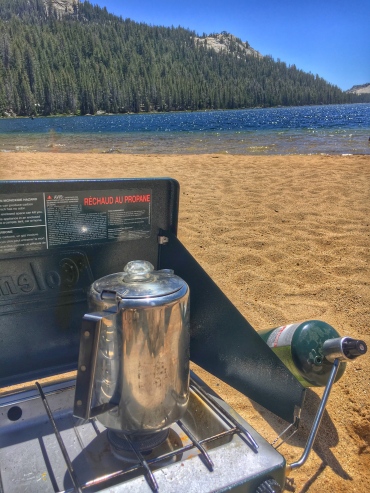 Another reason to get away from the Valley is Tenaya Lake. Sparkling blue, beneath impressive rocks and a cloudless sky, we had a beach day with a nap followed by fresh-brewed coffee. 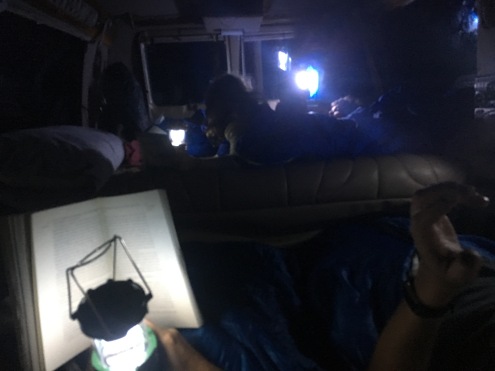 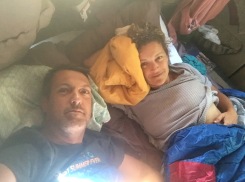 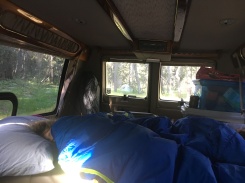 On our fifth night in the park, we packed up the gear and slept in the van so we could get a jumpstart on the next leg of our journey. We tried a better configuration in which our feet stretch out beneath the kids’ bed. One-by-one we’d bought sleeping bags over the course of our stay, anticipating more cool nights in the coming weeks. If you’re looking for us, follow the trail of discarded blankets.

10 thoughts on “Serenity in Yosemite”