Our visit to Zion was too brief, but the heat and cost of the accommodations motivated us to continue west. Destination: a little uncertain. A few days ahead we had a reservation at Yosemite National Park, which we already visited a few years ago. We had a little apprehension about the crowds that would greet us there. Even though we did laundry (in our hotel room bathtub), we needed to regroup a little. Fortunately, Monica’s sister lives in the desert oasis of Las Vegas, Nevada.

As we left Zion, we took the van off-the-beaten-path to the real ghost town of Grafton, Utah, on a bumpy dirt road outside the actual town of Rockville. The drive to Vegas dramatically criss-crosses the canyon formed by the Virgin River. I reveled in the opportunity to pull up to my sister-in-law’s gated community in our dusty van and its windshield display of 143 species of splattered insects. When we arrived, my in-laws were out of town, so we had the first night to send ten pounds of Zion silt through their industrial-sized washing machine, swim in their pool (outside temp: 106 F) and lay around their spacious home like we owned it. It was a nice chance for everyone to find a corner, read, play, and get a little space.

Left: Go turn your oven on 450, open it, stick your face in it. That’s what Vegas feels like in summer. Right: Nothing classes up a gated community like a big black van. Pretty sure the neighbors think they’re under surveillance.

We spent the next day visiting with the family. I got the oil changed in the van. We stocked up on food at the local Albertsons (which sported a dozen slot machines, in case you just couldn’t miss day without pouring some money into casino pockets.) Most of all, we pondered our next move. Would we spend 3 nights in Half Dome Village (a small city of canvas tents in Yosemite Valley)? Would we go somewhere else?

We had a free hotel night from hotels.com so we decided to head toward Yosemite, via Mammoth Lakes. I looked forward to driving up US-395 through Owens Valley in the Eastern Sierras – a place I spent many summer trips in my childhood. To get there, Google Maps gave us two options – both circumventing Death Valley. To Monica, this was a dare. Death Valley – in a 2002 van. “Is this a good idea?” I wondered. Of course it’s not. But we didn’t come all this way to play it safe.

Death Valley is known for having the lowest point in the US at -242 feet, and the record high temperature of 134 F. What you might not know is that it’s surrounded by 5,000 foot desert mountains, making the drive even more strenuous for our overloaded van’s V-8. The highest temperature I could confirm that day was 112, although the high was predicted to be 117. We stopped in aptly-named Furnace Creek (yes, furnace, no creek). Our five year-old daughter was not impressed by the abstract concept of a low elevation, nor the novelty of temperatures that melted her crayons. If you plan to really take in Death Valley, go in winter. 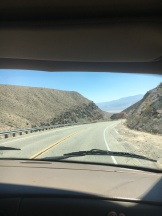 The really weird thing is that it also freezes here. Shout out to Bob Lee Tire in St. Pete who rebuilt the front and rear AC systems on the van. The coolant temp never budged off its normal reading, and the AC kept us comfortable through a drive I’d feared since the beginning of the trip.

The kids slept as we made our way through the land of my childhood camping trips, through the little towns of Lone Pine, Independence, Big Pine and Bishop. We reached Mammoth Lakes, a winter ski resort town, to find the town engulfed in the smoke of a nearby forest fire.

We were tired and the kids were cranky. The hotel we chose was under renovation, portions of the lobby hidden by curtains – and the telltale hotel room curse of FREE EAR PLUGS! Turns out, we needed the ear plugs to drown out the sound of bickering children, who managed to contradict every utterance the other made. We ate a meal in near silence and returned to the room. We retired for the night wondering if we’d bitten off more than we could chew with this trip. 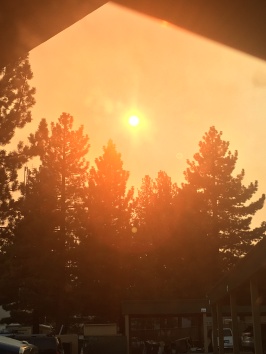 Ah, the smell of pine trees… on fire.

Our plan for the next day was to drive over the 10,000 ft. Tioga Pass, and enter Yosemite by the east gate – hopefully less crowded than the three-hour lines that were rumored to greet visitors at the gates on the west side of the park. Somewhere out there was the continent’s southernmost glacier. The van continued to purr, and sooner than I expected, we hit a line of stopped traffic. Oh, no.

The good news was that I could see the gate ahead. It wasn’t far. The better news was a ranger was working the line, like he was taking orders at Chick-fil-a. He spotted our annual pass hanging from our mirror and waved us around the line and we were in the park in 30 seconds. Just 90 minutes more to our destination in Yosemite Valley!

But just a bit few miles up the road, we reached the area that inspired John Muir to save the park, the unrivaled Tuolumne Meadow. The sign beckoned: Campsites Available! But we had a $180 per night canvas yurt waiting for us below Half Dome. I sat in the van while Monica negotiated with the rangers. She returned to inform me that they had a space available for five nights. Using a payphone (no cell service up there), she spoke with a park representative and determined that we’d have to forfeit the first night deposit on our Valley reservation. Fine.

I ran inside, told the young ranger, with long red hair that we’d take the site. She began the registration process.

“So where in Florida are you from?” she asked.

“Wait!” my mind raced. How could I have forgotten? A guy with three babies that I met twice at a friend’s house had told me his sister worked in Yosemite. “The triplets!” I blurted.

Soon we were issued a beautiful, secluded site beneath towering lodge pole pines (that weren’t on fire). We ate the $180 for our first night in the Valley, but saved $360 for the next two, and extended our stay in the park. 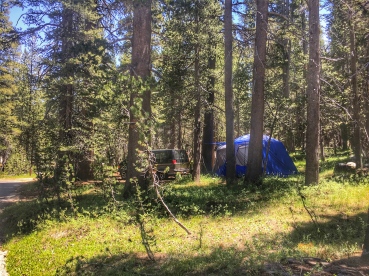 Left: We only have a connection to one park ranger in the world, and here she was the first person we spoke to upon arrival. Thanks, Kim! Right: You can’t see our neighbors because they aren’t there.

Would our spirits improve, dry camping for 5 nights at over 8,000 feet? Find out the whole story in our next post. Here’s a hint: I’m writing this draft on the sandy shores of Tenaya Lake, beneath a cloudless Sierra Nevada sky. Monica is hiking, the kids are playing “life guard.” I’m about to make a pot of coffee on my Coleman stove and read a book.