Leaving Pittsburgh, we had two days to get to Ocean City New Jersey. Our first stop was Gettysburg. Again, we took the Pennsylvania turnpike, even though it’s merely the old tracks of General Lee’s artillery brigade. Fortunately, the country roads, where the Amish ride in carriages, are paved. In Gettysburg, we cashed in a free hotel room that we earned on Hotels.com (no affiliation) and stayed at the Hotel Gettysburg, which opened when George Washington was President and served as a temporary White House while Eisenhower recovered from a heart attack. If it’s good enough for Ike, it’s good enough for me. And they let us park the Westy right out back because it’s too tall for the city garage (silly TV antennae that we don’t use).

This isn’t my first visit to Gettysburg. I toured the battlefield with my dad in the mid 1980s. Back then, we visited a small exhibit and hired a private guide to ride around and tell us the story of the pivotal three days in the American Civil War. Over the following decade I wrote at least six grade-school research papers on the battle – so it was a fruitful visit. Today, there’s a massive museum complex with packed tour buses leaving every half hour. The film, the museum and the tour are all worth every penny.

Left: In one pub, burgers are named for Generals. Union burgers come with an American flags, and Confederate burgers comes with the Stars and Bars – and dysentery. Right: In the downtown circle, someone has paid tribute to the economic impact the battle had on the town, with a sculpture depicting Lincoln… as a tour guide. I love the full color khakis and white cable-knit sweater. 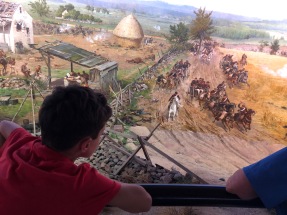 The museum has an enormous circular painting (cyclorama) created in the 1880s and restored in the 1990s. It’s installed seamlessly into a realistic battlefield display, and comes with a dramatic narration and light show. Middle: These bullets were found in the battlefield, fused together after colliding midair. It’s the only artifact that I remember from my 1986 visit. Right: A sculpture of Lincoln on his coffee break between tours. 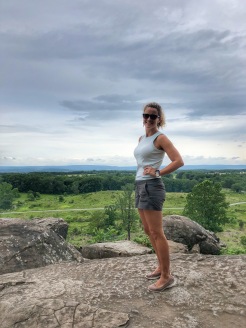 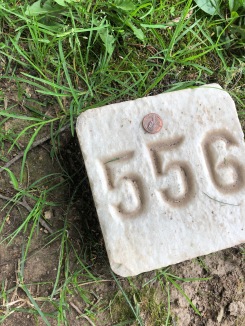 Monica defends the high ground of Little Round Top. The national cemetery was dedicated in a speech by Lincoln. In honor of the Gettysburg Address, visitors leave Lincoln pennies on grave markers, presumably because $5 bills tend to blow way.

We made our retreat from Gettysburg and rolled our German transportation into a land of olde German families. I’m talking about Amish Country. A land of farms, horse-drawn carriages, buffet restaurants, and oddly named towns. The town of “Bird in Hand” offered a bountiful all-you-can-eat “smorgasbord.” Our server wasn’t Amish – but she’d worked there 43 years. Bird in Hand, however, is the perennial runner-up in the contest of great town names in Lancaster County. We found our lodging at a spic-and-span Traveler’s Rest Motel in the town of Intercourse. 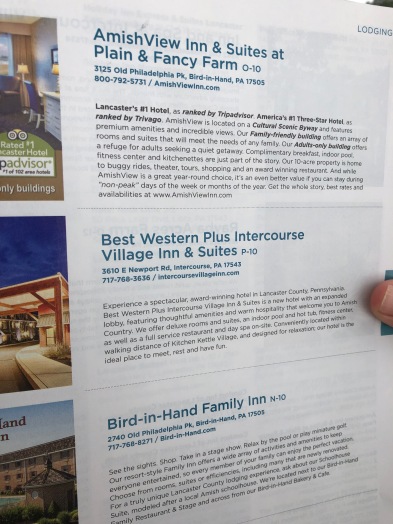 It’s hard to believe we passed up the chance to stay in the “Best Western Plus Intercourse.” But I could not pass up the coffee mug with the picture of Amish people under the town name.

All joking aside, we loaded up on produce at the Amish farmer’s market and stopped at an Amish house selling home made root beer (it was excellent.) Our van got a lot of curious looks from the Amish population.

Pulling out of Intercourse (yeah, I said that) we headed to the area’s other main attraction – another place I remember from a childhood road-trip – Hershey, PA. Perhaps the only place you can spend $90 on candy and not feel bad about yourself. Like my father before me, I refused to splurge for theme-park tickets or pay extra for some film about candy bars. We rode the free ride and then wondered how we’d get our daughter out of the building. 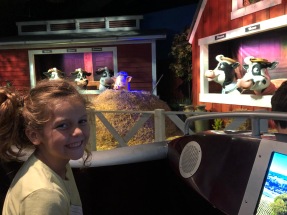 Laden with twenty pounds of chocolate, we headed to the Jersey Shore for the next chapter of our trip.