After I got back from my checkup in Cleveland, we had a couple of weeks to recharge our batteries at home. We hit a wedding, where we were part of a successful flash mob – dancing to Uptown Funk. The kids burned off some energy at a gymnastics camp and we had an abbreviated version of summer at home. Before we got too comfortable, it was time to hit the road again for a long-scheduled trip back to Great Smoky Mountain National Park. 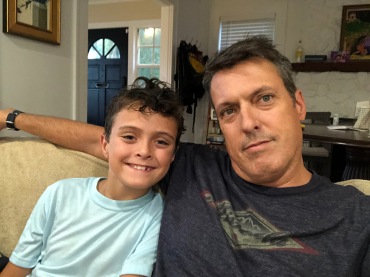 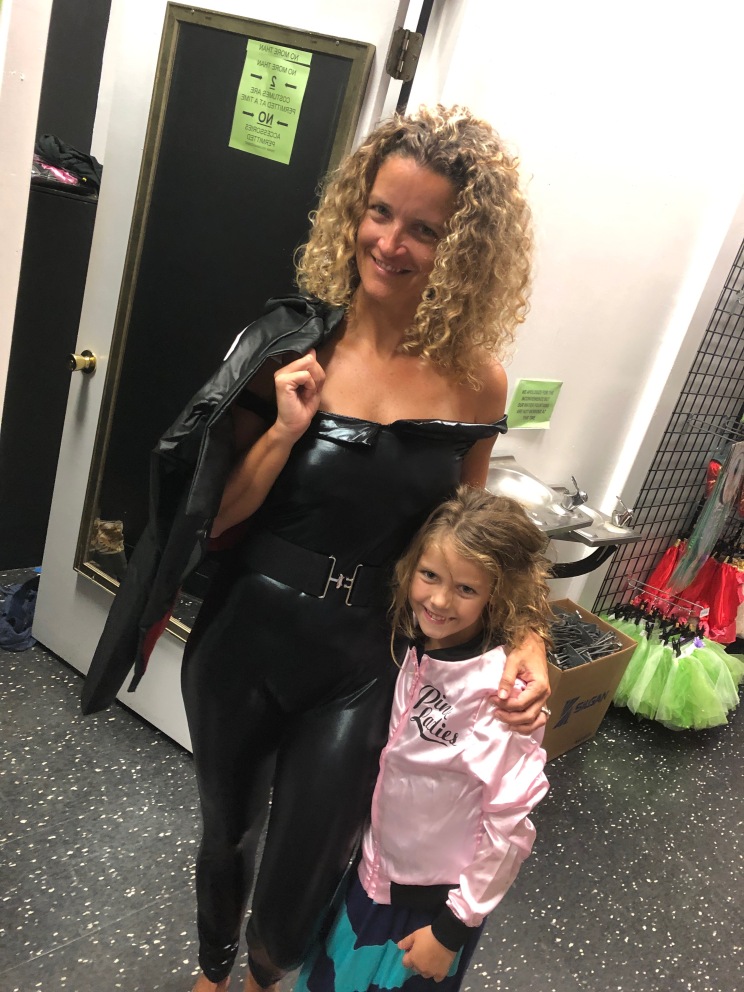 It rained for about 10 days straight, so we played inside. I’m a terrible bowler, and due to my vascular restrictions I’m even worse with the light ball. By contrast, Monica is highly competitive with well-honed victory dances. I took the kids on a scavenger hunt of the James Museum of Western and Native American Art (amazing place) – and we got a jump on the most serious holiday in our neighborhood, as our Grease theme for Halloween began to take shape. (I got chiiilllls – they’re mulitplyin’.)

The Smokies are a bit too far to get to in one day of driving. It’s certainly possible – but it’s no fun to drive 11 hours and then set up campsite. And now that I’m aware of my leaking aortic valve, more reason to be cautious. Ever the historical tour guide, Monica sniffed out a place we’d never been. Stone Mountain outside of Atlanta, GA.

Stone Mountain is a beautiful geographic anomaly, surrounded by a park run by the State of Georgia – but it’s not a state park. It’s an oasis, so close to the madness of Atlanta. There is the little matter of the giant carving of Confederate Generals on the side of the rock. I don’t really feel like getting into a huge discussion of whether or not this is “racism” or “heritage,” but lets just say that the original owner of the property played an integral role in the resurgence of the KKK and the park was dedicated on the 100 anniversary of Lincoln’s assassination. There isn’t much argument about where their minds were.

Lots more to see in Stone Mountain beyond the carving.

Today, the park twists itself in a pretzel trying to make the monument less controversial.  They have a summer laser and firework show choreographed to a playlist of patriotic and Georgia related music. It’s entertaining, that’s for sure. But, oh my, it’s so awkward the way it opens by projecting the image of Martin Luther King, Jr. over the reliefs of Robert E. Lee, Stonewall Jackson, and Jefferson Davis. I was particularly shocked at how many minorities were in attendance. It made me feel good to know that hallowed KKK ground was brimming with inclusion. Look away, Dixieland. 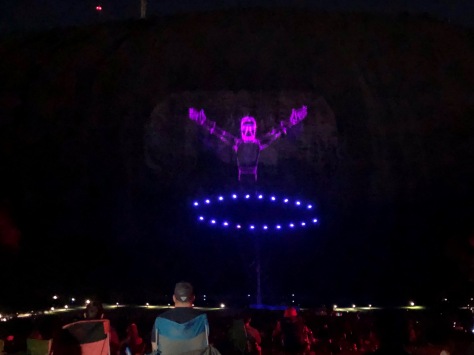 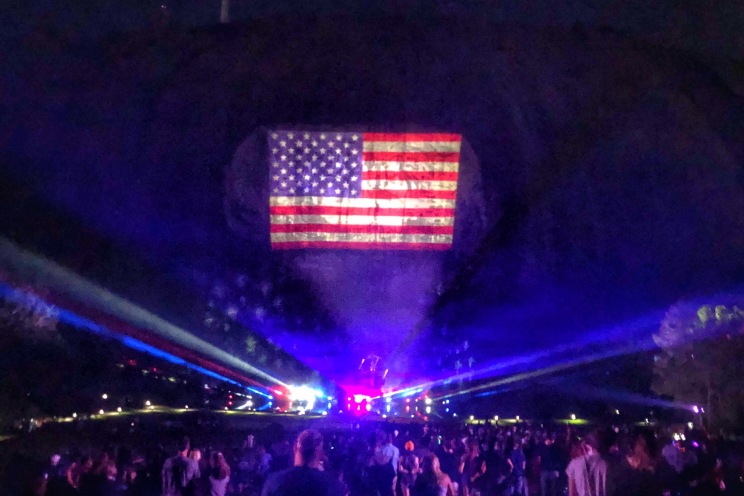 It’s almost like the Confederate Monument is in the way.

Much of the laser animation has nothing to do with the carving, but celebrates Georgia music, celebrity and sports. Eventually, the lasers bring the generals to life, as their horses gallop. Then, at the end of the sequence they draw their swords and laser-Robert E. Lee breaks his sword across his knee as Elvis Presley croons the Battle Hymn of the Republic. Glory, glory, hallelujah indeed – we all know Lee didn’t exactly lay down his sword in the name of peace. The show closed with patriotism (of the United States kind) including the schmaltzy Lee Greenwood song and and history was successfully revised. I apologize if I sound overly cynical. It is a beautiful place and the show is fun. There’s probably no perfect way to handle this complicated landmark.

As we headed to our campsite in Cade’s Cove in Great Smoky Mountain National Park, a long line of storms approached. We were at the southern end of that front, but it didn’t look like we’d be spared. With the threat of rain, I insisted on setting up the tent before doing any exploring. Add this to the long list of “why we should listen to dad.”

I love our big Napier Sports tent. It was our home away from home last year. It can connect to our van – but in this case, with bears in the area and the layout of the campsite, we opted to sleep in the tent (with all the food in the Westy). One thing we did not have a problem with last summer was rain. In fact, it rained on our first night in the Smokies, and then our tent never got wet again. Unfortunately, we were about to learn the hard way that all that up-and-down last summer left the seams needing a treatment of weatherproofing – a task I’d neglected. 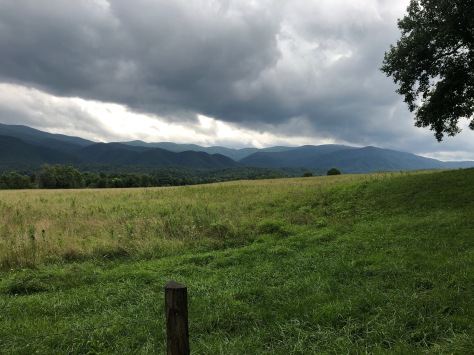 It started raining at dusk. Hard. We hunkered down and busted out the Uno cards. It rained. And rained. And rained. Close to five inches of rain fell that night. Water began to collect in one corner of the tent – then another. I ran outside and repositioned the tent-fly in hopes of diverting some of the deluge. But water was saturating everything. Zippers and seams were leaking. It was seeping through from underground, through our tarp and through the tent bottom. It’s not the tent’s fault – it wasn’t built to be a raft. 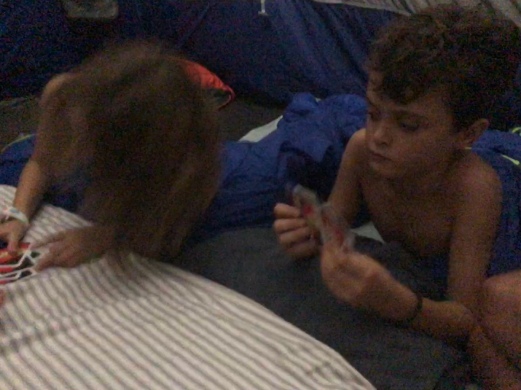 We got the entire storm… front to back, top to bottom.

Inside, we all edged ourselves closer and closer to the middle of the tent. Sleep wasn’t coming easily. And the rain did not relent. Somewhere around 2 am, our son – who later admitted being anxious about the rain and bears, said, “My stomach hurts.”

In this family, “My stomach hurts,” means nothing. Our daughter says, “My stomach hurts” every time she has to pee. Our kids regard the the onset of daily biological functions as a mystery – an acute illness. Then they go to the bathroom and feel better. It is this history of “crying wolf” that made me disregard the boy’s comment. Then he threw up bits of hot dog and boiled peanuts everywhere.

The wheels were coming off. What little dry space we had left in the tent was now hit with vomit. We didn’t know which “wet” was which. This is where the Westy saved the day. I ran through the downpour (doubling as a shower) to the van, popped up the top. My son and I quickly made our way to the dry confines of the Volkswagen, leaving Monica and our daughter to the last piece of dry ground in Cades’s Cove. We all actually managed three or four hours of sleep.

The morning light couldn’t come soon enough. I was eager to view the battle carnage of the night before, and rally the troops. We loaded the weary family into the van in search of hot breakfast and coffee. On a twisting mountain road between Townsend and Gatlinburg, we found Elvira’s Cafe. It was one of the finest meals I’ve ever eaten. In spite of the monsoon we’d endured the night before, everyone was in good spirits – laughing and wondering what more could have gone wrong. These are the nights families either fight over or bond together. We bonded. I don’t want to make us sound like some weird happy family that sings songs by the campfire ( but we do that too). We fight over little stupid stuff… We can fight hard over little stuff. But the big stuff, we tend to take on together. Plus, the forecast was looking good. It was still raining (going on 14 hours steady) but sunny skies were on the horizon.

We headed in to Gatlinburg for a straight dose of Southern culture on the skids. Gatlinburg is like injecting Honey Boo Boo and Duck Dynasty right into your arm. The main drag is a narrow road lined with buffets, bars, candy shops, wax museums, the Hillbilly Harley-Davidson (that’s its name), and a backdrop of hotels and timeshares. They aggressively peddle timeshares on the sidewalk like they do in Mexico. A steady stream of tourists dodder along the strip, a constant reminder to stay off of meth.

Our kids love it. 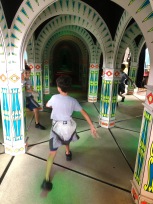 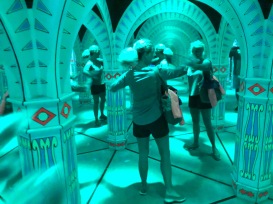 Far left: One of Gatlinburg’s candy shops has a handy example of what you’ll look like if you visit too often. After lunch we snuck in a game of indoor mini-golf and then the surprisingly confusing mirror maze.

Last year, I’m sure I wrote something snarky about the laundromat in Gatlinburg, Tennessee. It seemed much nicer this go-around. We washed and dried everything that got rained and puked on and went on a shopping spree in the Family Dollar next door (so much cheap stuff I didn’t know I needed!). We hit a great camping outfitter at the edge of town (bought some tent seam sealer!) and gorged ourselves on another huge meal as the sky finally turned blue.

Ahead of us, four days of dry weather beckoned in the forecast.

Once our son saw the size of the mama bear living in the woods by us, he was less concerned. I think he would have been more afraid if it was a dog. We pulled the middle row out of the Westy to free up the space for cooking and washing dishes. It doubles as a great bench by the campfire. Night two was cozy and dry.

One thought on “Rain, and vomit and bears, oh my!”