Don't make me turn this van around!

One family. A difficult diagnosis. An old van. And a new lease on life.

I’ve given Monica a bit of a hard time this summer about her map reading skills. In truth, she really only got us lost once, and it turned into a real adventure. She’ll readily admit her lack of geographical memorization and I have caught her looking at the wrong state out west last summer (they’re all square, right?), but she was a National Merit Scholar so I’d trust her over most people. I, on the other hand, can be a little too efficient in my map reading. I would have NEVER sent us all the way to the Atlantic Ocean in order to get to Pittsburgh this summer. But that rigidity would have had us miss Charleston and Chippokes Plantation in Virginia.

When we left Charlottesville, VA, we had to get to Raleigh. You can either go an extra fifty miles on the Interstate and shave thirty minutes off the drive, or you can take the back roads. We took the back roads with our eyes on checking out Appomattox Courthouse, where Robert E. Lee surrendered to Ulysses S. Grant (why so many middle initials?) to end the American Civil War. Here’s a bit of trivia: Appomattox Courthouse is the name of the entire town. (I sort of knew that, but didn’t fully understand what went down). Lee didn’t surrender to Grant in a courthouse, but in the parlor of a house owned by Wilmer McClean. So get the image of a southern courthouse out of your mind.

It just so happens that McClean was living near Manassas, VA, when war broke out,and his farm was the site of the first skirmishes in the first major battle of the Civil War, the First Battle of Bull Run. He said to himself, “This place is too dangerous,” and relocated his family to Appomattox Courthouse. After the surrender, McClean bragged that the war started in his back yard and ended in his parlor. Officers and soldiers at the time recognized the importance of the occasion and pretty much took everything that wasn’t nailed down as souvenirs. But much of the memorabilia has made its way back to the museum.

As a tourist site, Appomattox Courthouse National Park is a quiet contrast to Gettysburg, but truly fascinating because it challenges the way the surrender is taught in American School – not because the textbooks are wrong, per se, but because the teachers explaining it simply haven’t been there. Oh – and more amazing is the $3.29 ethanol-free 93 octane gas we found along the way.

There weren’t many towns between Appomattox and Raleigh worthy of a “dot” on the map. But, being an excellent map reader, I zeroed in on the town of Clarksville, VA, on the Roanoke River. The area is loaded with state parks, but the weather had turned hot, so camping was questionable. We’re not trying to prove anything by sleeping in the sweltering Southern summer.

Clarksville brags that it has the “only riverfront downtown” in Virginia. The bragging can stop right there. By all appearances, Clarksville’s “riverfront” exists because when the dam was built, the high-water line crept to the edge of town and – voilá – waterfront property. The woman checking us in to the hotel began by lamenting all the Mexicans staying there, referring to a construction crew that seemed to be the only other guests in the hotel. She then told us to go to the Mexican restaurant, and badmouthed the place across the street. I wanted to tell her that I loved Mexicans but can’t stand racists, but something told me that this was not the time or place in Trump Country. Truth is, the whole town might be better off at the bottom of the lake. 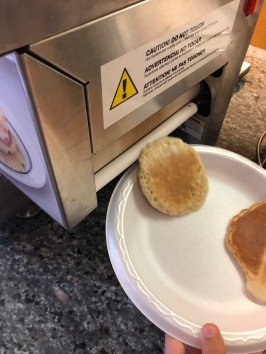 Let’s hope this pancake machine doesn’t sweep the nation. It clunked out two hard disks and sent an error code I’d expect from an HP printer (no offense to HP). The hotel was on the tranquil shores of Buggs Island Lake, which is presumably named after the bed bugs that bit Monica in the night. This is one hotel stay that Monica will not let me live down. On the plus side, I never have to pick another hotel again.

From Clarksville (no relation to the Monkee’s song) we pulled into Raleigh to visit a friend I’ve known since college. The fact that we’re both somewhat respectable men with graying hair is remarkable – and a testament to the women we married. This was the last major stop of the trip, and a chance to relax and unwind a bit.

The first thing we did was hit the pool. And guess what! The fifteen minute pool break is alive and well in Raleigh! If you don’t know what I’m talking about, check out our visit to the city pool in Charlottesville where to prevent swimmers from drowning, the entire pool was filled with lifeguards. I’m kidding, of course. But yes, the pools in my friend’s neighborhood enforce the same hourly “time out” that we experienced in Virginia. I assume that they also enforce the “no swimming for two hours after you eat” rule and believe the moon is made of cheese.

The good news is that the life guards at this pools didn’t require us to keep our kids on a leash while they swim.

My friend took us on a tour of Raleigh as we checked out a couple of museums and a coffee shop. First, in an attempt to do something kid friendly, we visited the Marbles Children’s Museum. My friend had never been there, and he – understandably – described it as a “marble museum.” Marbles are awesome, and our minds filled with images of amazing marble tracks. I pictured each of our kids walking out of the gift shop with an olde tyme sack of marbles. Good wholesome fun.

Alas, there isn’t a marble in the whole joint. Upon further reflection, a kids museum full of marbles might better be called The Choking Hazard Museum, or the Heimlich Center. The first floor was full of toddlers, and I watched our kids deflate. But then we made it to the second floor where the hands-on sports, art, and construction areas had a tiny hockey rink and a DIY tool shop complete with chunks of wood and real saws and hand drills. Given enough time, we could have walked out with a homemade bookshelf.

After the non-marble marble museum, we went to the North Carolina Museum of History, which is definitely worth a visit. Lots of high quality Civil War and Civil Rights exhibits. And it was free. After that, we found Morning Times – two stories of coffee shop greatness.

Between brunches (The Irregardless Cafe is fantastic), pools, and museums, Raleigh was a place to relax with friends. And these particular friends have a tendency to break out in song… karaoke, that is. Last year, they played coy, suggesting a little innocent karaoke before busting out in well-polished favorites. This year, they were breaking in a brand new machine. And Monica was ready, after rehearsing “Come A Little Bit Closer” in the Westy earlier in our trip.

This is how Lady Gaga got her start.

My friend Tom looks like he’s crooning some Bro-Country ballad about pick up trucks and whiskey bottles (but it’s probably Bon Jovi). Our daughter busted out some Taylor Swift and Monica won the “good parent” award by agreeing to a game of Twister.

As Raleigh ended, our trip drew to a close. We made an overnight stop in Savannah, which we will revisit later. But we had to get home for a wedding and a couple weeks of recuperation. It was a good thing we went home because one of us had Lyme disease lurking and we still had another couple weeks of travel coming up.

Savannah we barely knew ya. We had about 12 hours to take in a swim, a walk, and a meal before the final leg home.

Still to come this summer: I make my annual pilgrimage for my checkup at the Cleveland Clinic. We get drenched in the Smokies, make a long pit-stop at a lake, an unscheduled pit stop in Columbia, SC, and return for another whirlwind stop in Savannah, GA.

One thought on “Summer ’19, Part 9: Losing our marbles in Raleigh”

Follow Don't make me turn this van around! on WordPress.com