Coming out of Shenandoah Valley National Park, we had a couple of days to kill before visiting a friend in Raleigh. It offered our second chance on the trip to pop over to Richmond and extend the summer’s Civil War theme. (Did you know that Richmond, the capital of the Confederacy, is only about 100 miles from D.C.?) I wanted to see the city because my friend Lee Irby is a novelist originally from Richmond, and his recent masterpiece, Unreliable, is set there, and involves a Confederate monument. But…

Sure, why not? (I think she picked it because it was a much shorter drive. Sorry, Richmond.)

Here’s what I knew about Charlottesville: It’s home to The University of Virginia, and I’m still mad at them for beating Florida State in football in 1995. Dave Matthews Band started out there, which is also interesting to “college me.” And they have a bunch of doughy polo shirt wearing frat-boy white nationalists who are a painful boil on the country’s white ass. And I heard it was a charming town in all the good Southern ways too.

And it turned out to be a great stop with all the things you want in a trip: A nice hotel, an interesting and walkable downtown, good restaurants and, of course, bookstores. 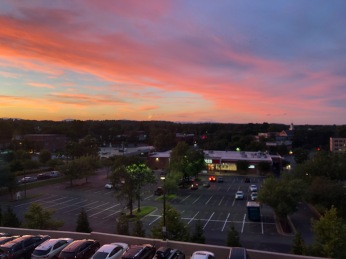 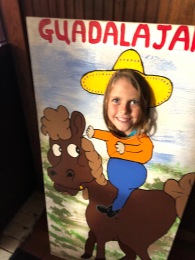 Charlottesville gave us the chance to charge our batteries. Literally. This 120 watt solar kit is brilliant. It’s not fixed to the roof, so if we’re parked in a shaded campsite, I can still string it out to a sunny spot. It keeps us charged enough to run the water pump and house lights.

It’s always fun to walk into a nice hotel after a few days of camping. Our arrival is preceded by the smell of campfire. Unshaven, unshampooed, and dressed like the cast of a live-action Yogi Bear movie, we fill a luggage cart and roll in with an overstuffed laundry bag and a half empty 12-volt cooler. At home we don’t have cable television, so the kids are suddenly mesmerized by the shows they can’t stream on Netflix. This year they’ve been hooked on the coming-of-age My-So-Called-Felicity- Saved-By-The-Freaks-And-Geeks take-off called “Andi Mack.” It’s all about a girl who doesn’t know her dad, finds her dad, and spoilers, gets him to marry her mom. It’s endearing. I’m sure there’s a right-wing website decrying it’s open-mindedness, diversity, inclusive message, a positive themes (I was wrong, there are dozens like THIS). Let’s face it, folks, a truly realistic show about middle school would’t be suitable for television. I think kids can handle a gay character – they already have gay friends. We caught the series finale and there were tears. 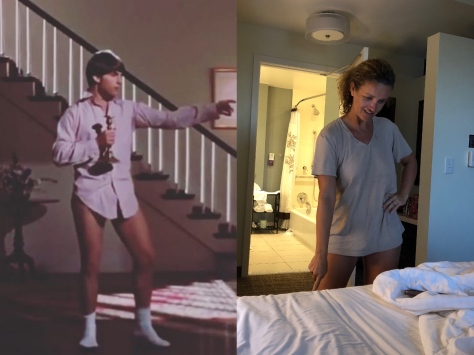 One reason we’re splitting our summer travels in half is that we had wedding back home in which we were supposed to participate in a surprise “flash mob.” Monica LOVES flash mobs – so much that they make her cry spontaneously. Running out of precious time, Monica began learning our Uptown Funk moves off a YouTube video.

Old house with history? Where do we sign up?

I’m a little ashamed to admit that I didn’t know that Jefferson’s famous home, Monticello, is in Charlottesville. I knew it was in Virginia, but thought it was one of those “in Virginia, but really D.C. area” places. It was at the top of the list of places to visit. We took a “family oriented” guided tour. By “family oriented” the tour guide focused on things that kids would be interested in, and asked them questions. It’s a good tour for adults too. She left out the part where “Jefferson had six children by his slave mistress Sally Hemings.” But Monticello does not gloss over this part of Jefferson’s history, offering entire tours pertaining to the Hemings family. It’s a beautiful place and the fact that it never fell into the wrong hands is remarkable.

After Jefferson died, Monticello was sold off to pay his debts. Apparently the free labor of thousands of slaves wasn’t enough for Jefferson to turn a profit. In fairness, he married into debt and at his core, he was a writer. 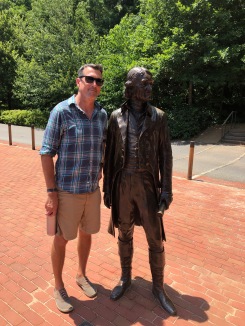 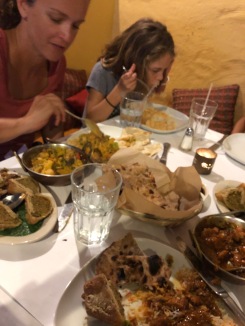 Left: That’s the look Monica gives when she almost locks the keys in the van. Center: Me and TJ. Right: Finishing the day with some Himalayan Fusion. We had no idea what Himalayan Fusion would be, so we ordered an insane amount of food that only cost us like $45.

We took a quick gander at UVA, which (I did not know) was founded by Thomas Jefferson, (I think he was also the first executive chef at the Himalayan joint). He died shortly after UVA opened, but the rotunda is his design. The original dorm rooms surrounding the lawn are coveted residences. They might be a bit drafty and old, but they come with fireplaces (in a college dorm!) and the prestige of living within the same walls that housed Edgar Allen Poe, Woodrow Wilson and… Katie Couric (yeah, that’s a jump). We were duly impressed. 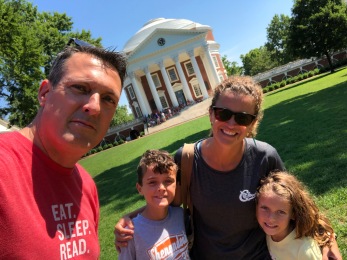 Top right: Woodrow Wilson’s door. Bottom left: Edgar Allen Poe’s quarters are preserved in what they might have looked like when he darkened the doorway. Each room has a list of everyone who has stayed there.

After torturing our kids with old buildings and Thomas Jefferson trivia. We hit a city pool to cool off. This is where we first encountered a bizarre ritual that I hope never reaches Florida: Break time at the pool.

We arrived at a Charlottesville City pool, found a couple of chairs, and noticed: no one was in the pool. (Did someone poop in it? I wondered.) Apparently, for the last fifteen minutes of every hour, they force all the kids out of the pool, to give the life guards a break and (presumably) to let the adults have some calm time to swim. This is a terrible idea. If they attempted this in any public pool in Florida, I believe it would be met with violence.

So, we got there, and had to wait fifteen minutes to get in the pool. This meant EVERY kid got in the pool at the same time. Then, thirty minutes into our swim, dark clouds formed and they emptied the pool for lightning. Pretty sure that thirty minute swim cost us $45. 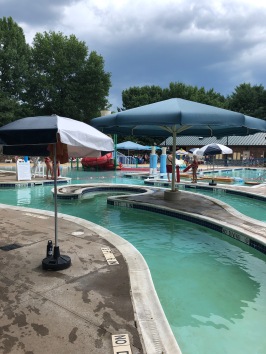 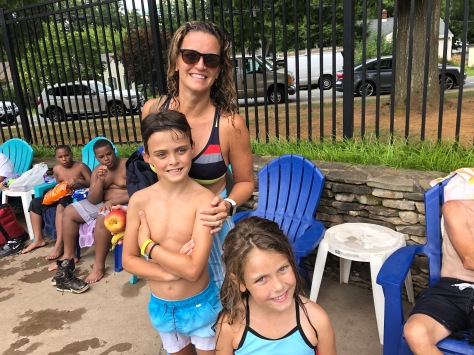 Seriously. They empty the pool for 25% of the day. It’s madness. There were roughly 100 lifeguards, but when our daughter – who can swim – wanted to cross a rope/obstacle thing, the lifeguard was not willing to offer a hand and required one of us to stand nearby in case she fell in and forgot how to swim. A kid could literally fall on top of a lifeguard and they’d require a parent to retrieve them. 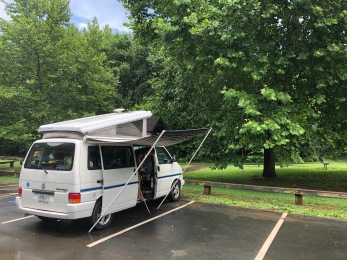 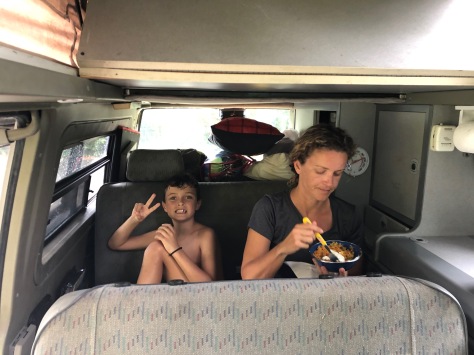 With yet another storm, the Westy provided shelter and a kitchen, as we heated Himalayan Fusion leftovers in a nearby park. The awning collected water for dishwashing.

The main street in Charlottesville is for pedestrians only and has a concentration of coffee shops, bookstores, toy stores, restaurants and theaters. It’s an idyllic setup with lots of shade. It sure would be great if I took a picture of it, but I didn’t. We left Charlottesville in the early afternoon, with the goal of getting a few miles under our belt before reaching friends in the Raleigh area the next day.

Next week, we’ll check out an(other) underrated Civil War site, karaoke with old friends, and examine the finer points of how not to book a hotel. Until then… don’t let the bed bugs bite!

3 thoughts on “Summer ’19: Part 8, A Right Turn to Charlottesville”

Maine is just like Florida, except it has rocks and mountains and extremely long views. And it’s 50 degrees. In June. Other than that it’s just like Florida. #maine #acadianationalpark #walkinginnature #familytravel #atlanticocean
What are the chances @keen will bring back these backpacks with built in seats? Mine is close to 10 years old and starting to wear out. Hello @keen, I need to know if you have any of these wasting away in a warehouse somewhere. #keenfootwear #keenbackpack #hiking
Not leaving #maine #acadianationalpark #barharbor #hiking
A few favorites from Maine. We may not leave. #acadianationalpark #popovers #jordanpondhouse #barharbor #maine #downeastmaine #cadillacmountain
If I post a picture of yesterday afternoon’s coffee on a rocky point this this morning, do I seem like a go-getter? #acadianationalpark #maine #coffee #familytravel
Perfect weather for our first day on this rocky coast. #maine
Loading Comments...
Comment
×
%d bloggers like this: