Before getting in to this week’s post, I want to say a word about a man who lost his fight with vEDS this week. J.B. was a frequent voice on a vEDS Facebook group that I follow. He’d had several complications over the years. Last week he suffered an abdominal dissection followed by multiple ruptures and he finally succumbed to a stroke. J.B. was often helpful to other members of the group and he was often frustrated. Frustrated that he wasn’t able to get approved for Social Security Disability, frustrated that he couldn’t get insurance coverage. The failures of our health care system shorten the lives of people with many conditions – and it’s acutely apparent with vEDS. J.B. died at 35, father of 3 children. This disease can leave a feeling of helplessness. In this week’s blog post, I highlight one way my wife is fighting that feeling – by doing something to support awareness and research into vEDS and related conditions.

There’s a voice behind this blog that you don’t hear, but it is always there. It belongs to the backbone of our family, my wife Monica. If you think I’m about to compose a 1,000 word tribute to her intelligence, beauty and humor, you’re wrong. This time. In just a few weeks, Monica is going to run the New York City Marathon. This is her first marathon, but it is so much more than a challenge to overcome.

First, a little history: I’m not a lazy guy – but in the last two decades, if you think you saw me in the gym, you were mistaken. If you thought you saw me out running – I could probably tell you the exact year it was (and the other twenty that it wasn’t). No, I’ve always been a participatory sports kind of guy. I was a decent third baseman as a kid. I played varsity tennis in high school. I was always a good basketball player in pickup games. Most sports came somewhat naturally – be it volleyball, golf (meh), or flag football. I even played intramural sports in college, and held my own. But in my adult life, abstinence from a fitness routine was enough to maintain my average-dude physique. 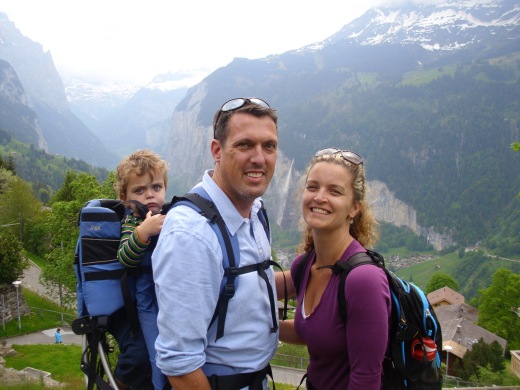 Before my body was a roadmap of surgical scars I could do things like carry or wear a child.

But Monica always strived for more. When we met, she was a regular runner – entering 5Ks and doing pretty well. I ran a few with her, proving that my love for her has no bounds – but a love for running never materialized. She has a rod in her back from a car accident in high school – not a piece of the car – but a resulting surgery. After having our first child, her back gave her trouble and she gave up running – but kept walking and walking – and walking. 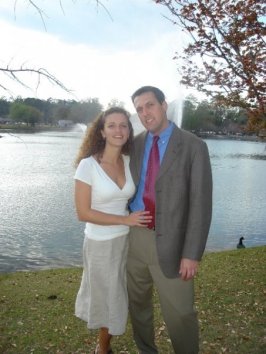 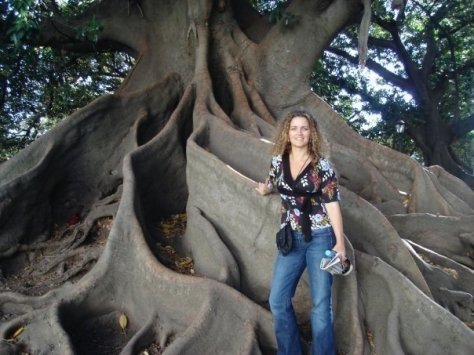 Before we had kids, we had a look of innocence. And Monica was so fashionable, while I look like I’m in borrowed coat. The second picture was taken in Argentina… roughly 9 months before our son was born.

Right around my 42nd birthday – I decided to intervene in the looming atrophy of middle age. I started running, doing sit-ups, and we joined the rock climbing gym. We had so much fun there, that Monica gave me an annual membership to the rock gym for my birthday. It was something I never would have taken up at age 42 had I known that I was born with Vascular Ehlers-Danlos. A week into my shiny new membership, I ruptured an abdominal aneurysm – the first in a series of near-death events that marked my transition from seemingly healthy adult to someone battling a rare genetic condition. 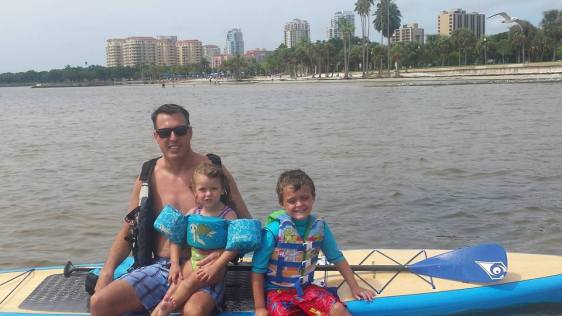 Shortly before my first aneurysm ruptured, I was doing things that – in hindsight – weren’t the best thing for a middle aged man who doesn’t know he’s got defective arteries.

Frankly, I had the easy task. I had to rehab to regain my strength after 7 surgeries. I had to come to terms, psychologically, with a life viewed through a completely different lens. Yes, this was tough stuff – but it was also completely self-indulgent.

Monica, on the other hand, had to deal with my health issues, while maintaining the family, and a full-time job. And, yes, she also had to come to terms, psychologically, with a life viewed through a completely different lens.

It was her turn to take care of herself. About a year ago, she cast a toxic work environment aside. She decided to free-lance and take more time for herself and the family. She dusted off the family YMCA membership and started going to classes three mornings a week. Within a short time, she felt strong and started running again. 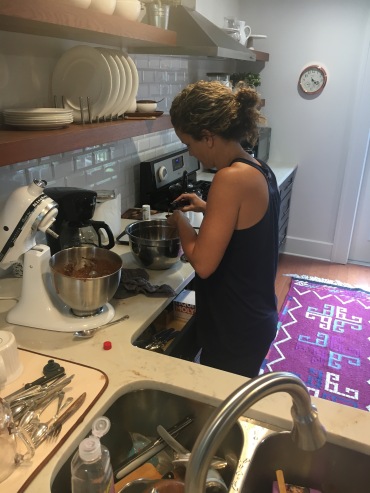 Bootcamp classes were a gateway drug: to marathoning… and baking.

I don’t even recall exactly how the marathon idea started, but sometime in the spring, she got the idea. As it happens, the John Ritter Foundation, whose mission is to promote education and research of aortic aneurysms and dissections, has a New York City Marathon charity team. (John Ritter was a beloved sitcom actor in the 1980s and 1990s. He died from an aortic dissection suffered on the set of his show 8 Simple Rules for Dating My Teenage Daughter.) She submitted her application and in a whirlwind of emails, Monica was accepted to the Ritter Foundation’s NYC Marathon Team.

I believe these photos were taken following 18 and 20 mile runs, respectively. Running has allowed Monica to bake her cake and eat it too – followed by an attempted nap. The children have absolutely no clue how quiet we were when they napped as babies. We didn’t flush toilets, and avoided entire sections of our small house. I once told my own yard guy to leave when our son was taking a Saturday afternoon nap.

I won’t recite the sing-song platitude that she’s “running for me.” She doesn’t need to run a marathon for me. She’s running this for herself. This disease has affected her as much as it has affected me. The marathon is a testament to her dedication to celebrating the life we have. She’s as happy as I’ve ever seen her – and that has a big impact on our entire family. In the shadow of all the bad news, I can’t imagine being any happier.

Soon, we’ll all fly up to New York (our family’s favorite place to visit again and again) and Monica will spend about 4 hours (that’s her goal) running 26.2 miles through the city’s 5 boroughs. I’ll shuttle the kids around Manhattan so we can see her at 2 or 3 three points on the course to cheer her on. I’m not sure who has the more difficult task that day. We’ll be wearing matching purple shirts. Those of you who know me, know how difficult it is for me to wear matching shirts – much less purple.

The race is on November 4. Monica leaves in the 11:00 am wave. Tech savvy readers can follow her progress and view race photos on the NYC Marathon App. Follow us on Instagram and Facebook for photo updates. If you want to donate to her team, visit her fundraising page. Thanks for following and for all the great feedback!