At the end of our last post we officially turned the van around, and began our journey east. No longer could we threaten our kids with putting the vehicle in reverse (which, believe me, we did – early and often). Leaving the west coast, we felt a little pressed for time. We had a few days before a coveted campground reservation in Yellowstone, followed closely by an annual family gathering at a lake house in South Carolina. Last time I checked, Seattle isn’t all that close to Yellowstone, and Yellowstone isn’t particularly close to South Carolina. Yet, by milage we were only half through our trip. The road ahead was daunting. As the saying goes: How do you eat an elephant? One bite at a time.

The first bite of the elephant would be served with potatoes: Idaho Russets to be specific. When I imagined this trip, I had visions of intrepidly turning on to a lonely dirt road at the end of the day and “boondocking” (camping off-the-grid) on the endless expanse of public Bureau of Land Management and US Forest Service land. Real “vanlifers” don’t pay for campsites.  (I’d actually done this for a night on a cross-country trip in college. My roommate and I pulled off the highway in Texas and rolled out our sleeping bags in back of his Chevy S-10. We woke up surrounded by longhorn cattle who had come to laugh at the little pickup.)

And she parallel parks. 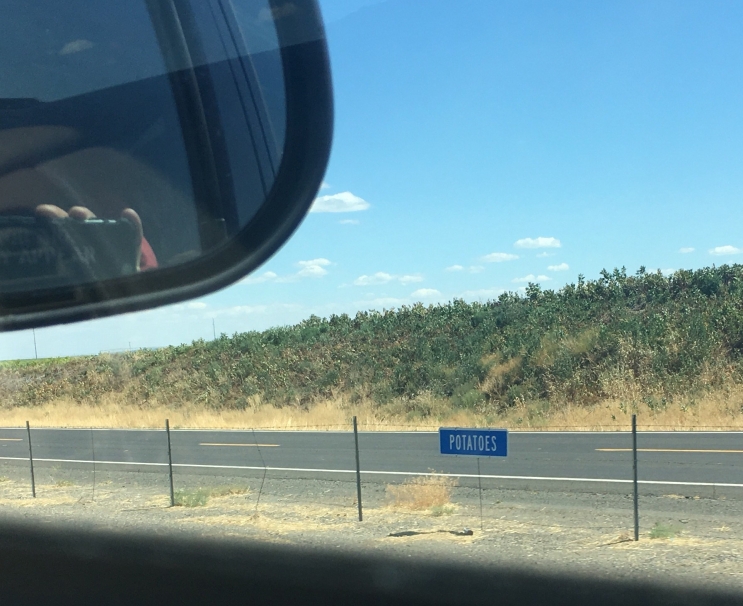 Interstate 90 across Washington into Idaho is a beautiful transition from the piney Northwest to a high rolling land that alternates between high desert and mountains. Oh, and lots of potatoes. Top right: We stopped at a very busy truck stop owned by the family of “Miss India USA” – aka “Shree.” They are so proud of her, they named their truck stop after her. Bottom: For a while in Washington, signs informed drivers of the crops growing in the adjacent field. I think this should be the law everywhere because I’m always wondering what’s growing nearby. Most of the signs said “Potatoes” and “Peas.” Over and over and over again.

Alas, boondocking was not in the plan. As we passed through miles of open-range in Idaho, we found “Camp Coeur D’Alene,” on the banks of its namesake lake. Camp Coeur D’Alene may sound like a kids summer camp, but it’s a former KOA with showers, a pool, and even some little log cabins I can’t imagine ever wanting to sleep in. I think they dropped the “KOA” affiliation to avoid the bad reputation. One of the online reviews boasted of free firewood. Free firewood? Have they seen Monica build a fire? She can burn an entire Sequoia in one night.

We pulled in to check it out.

The area for tent camping was near the lake and had grassy spaces separated by a wooden fence. There was nothing private about it and the family next door looked like they’d been family for many generations, but it was a prettier than a Comfort Suites. We planned to sleep in the van, so we took the spot and settled in. I was heartened when an Army officer pulled up in his Toyota Tacoma with rooftop tent and made his home for the night. I told him it was the first time since owning the van that I’d looked at another man’s vehicle with envy.

The lady in the campsite next to us was on her phone complaining to a friend that “this resort is infested with bees.” Indeed, the tree in our site had some sort of bee/wasp nest in the trunk, but they weren’t really bothering us. I was amused that she referred to the place as a “resort” and frankly can’t understand why someone would stay in a place like that for more than one night. Granted, they have a pool and some basic facilities, but it’s really just a legal place to park and sleep without getting hassled. 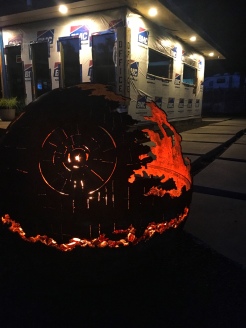 Left: While Camp Coeur D’Alene may not have qualified as camping, they did offer free use of a canoe and one-and-a-half paddles. I’ve never sat in the front of a canoe in my life, but somehow Monica ended up in rear – steering (leaving me to assist with a busted paddle). She did juuuuust fine. Center: Nerd Alert! They had a gas fire pit in the shape of the unfinished Death Star from Return of the Jedi. No idea why it was there, but it was cool. Right: Fake camping was way better than a random roadside hotel. And yes, there was free firewood and I made a raging fire that could be seen from Tatooine.

Just outside of Coeur D’Alene we had to pull over to see the Cataldo Mission at Old Mission State Park. Here, the work of a few die-hard Catholics has been preserved for over 160 years. I only bring it up because everything in the church was carved out of wood, or cut out of leftover tin from food cans. But it’s looks like something made of marble, plaster, and silver. Check out the picture on the right. It’a all wood and tin. 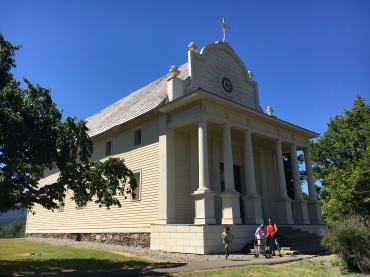 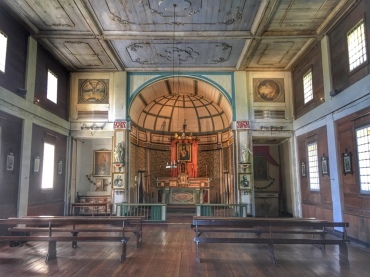 Sometimes the $5 attractions that weren’t on the itinerary are the best.

At this point in the trip we’ve hit our stride. The kids still get on our nerves and we express displeasure with Shakespearean flare. There are no veiled threats. Punishments are clear and sudden. Tears are swift. Remorse and forgiveness follow. If anything, we’re all getting a little weary, but there’s so much more to see. Missoula is next and I’ve never set foot in Montana. In our next post we’ll see what this “Big Sky” business is all about.

2 thoughts on “You can’t get there from here”