We left Santa Fe after four nights in the tight confines of a hotel. It bordered on a being a really nice hotel. The rooms were “okay,” the restaurant was really good, the pool area was pleasant. One section of the hotel (not ours) came with a butler! Monica learned that those who accidentally enter this portion of the premises (looking for the gym) are given authentic rude-butler treatment and escorted back to the world of average people. The weird episode was witnessed by a “First Class” guest, and we ended up getting our “resort fee” and room upgrade charges waived (a fee with dubious benefit to begin with.)

Even a nice hotel room starts to feel like prison when sharing it with kids for four days. The atmosphere was a little tense as we began our five-hour drive northwest to Mesa Verde National Park in Colorado. Shortly into the trip, the kids dozed off. We passed historic markers for the desert home in Abiquiu of renowned painter Georgia O’Keeffe. We pressed on.

But just a bit past the little town of Abiquiu, New Mexico, was a sign for “Ghost Ranch” – with some amazing cliffs overlooking the valley.

“Should we check it out?” I asked.

Soon, we found ourselves standing on the porch of an abandoned cabin that was part of the set of the Billy Crystal classic, City Slickers. Further up the dirt road we found an oasis. A retreat center – dinosaur museum – archaeological site – campground – trailheads – library… Wait. Did I say “campground?”

Our cowgirl kicks on the porch of the City Slickers cabin while the van has a moment of reflection. Monica leaves the stress of the city behind as the kids range free.

Ghost Ranch was the inspiration for much of Georgia O’Keeffe’s work and inspired us to stay a couple of days. We found a practically empty campground between red cliffs. The ranch was buzzing with small groups of people on various natural, artistic and spiritual sojourns. Hiking trails from easy to impossible zigzagged in every direction. One night turned into two nights and even though we were interlopers in this center of desert tranquility, we found our Zen. 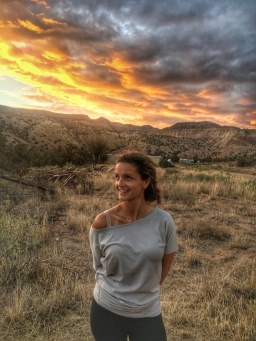 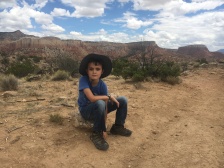 I debated not giving out the name of this piece of heaven on earth. 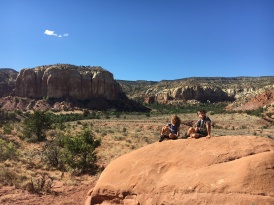 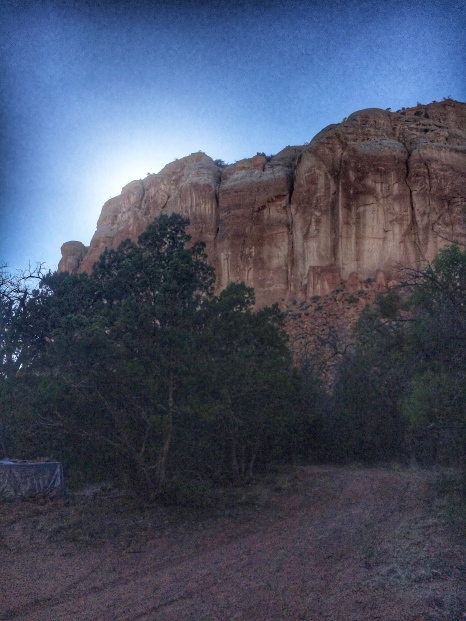 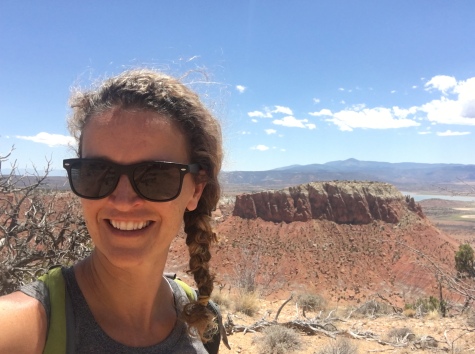 Ghost Ranch turned me into a decent photographer. Did I mention that Monica climbed to the top of the mesa? Past a rattlesnake? Alone? Her selfie skills are strong.

We left Ghost Ranch conjuring up the different ways we could return in the future. Mesa Verde was finally – belatedly – in our sight. I’ve always thought New Mexico had an underrated beauty, and it continued to get better as we reached its northern border. Two days behind schedule, we crossed into Colorado, made our way through a series of quaint mountain towns (had Subway sandwiches made by someone high on pain pills) and then reached Mesa Verde National Park – site of some incredible cliff dwellings that have to be seen to be believed.

Mesa Verde is not a terribly busy park. We rolled in without a reservation and booked a beautiful dry campsite (the RV sites were booked up – not that we wanted one). The place had spotty working Wifi in the campground which allowed us to grab little bits of information. Days were hot, evenings were windy and nights were downright (refreshingly) cold. Within 5 minutes of claiming our campsite, our kids had made a half dozen friends. Nothing beats kids in a nearby site. 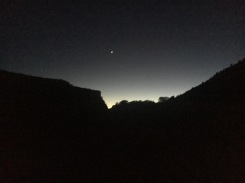 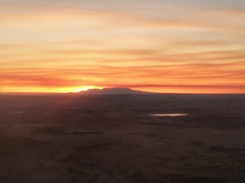 At the back of the campground, beyond that ridge, the mesa abruptly ends, offering views of a horizon 100 miles away (don’t fact-check me on that.)

There are several cliff dwellings to see on ranger-guided tours. My physical limitations meant that Monica and our son took on the ambitious Balcony House, including its 32 foot-tall ladder, while our daughter and I joined them for Cliff Palace. If I’m totally honest, the short ladders weren’t a problem for me (as I hoped I wouldn’t have a dizzy spell), but the steps back up to the mesa-top at over 8,000 feet elevation, had me evaluating my decision to participate. Fortunately, putting our five year-old in front of me on the ascent gave me an excuse to take it very slowly. 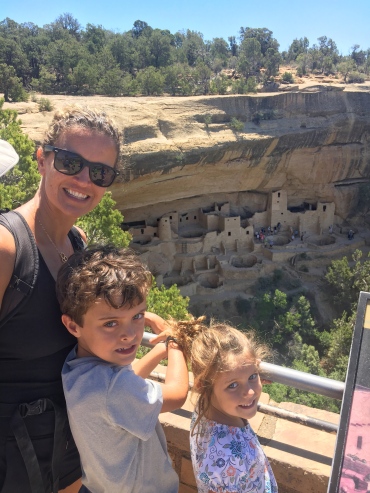 It’s probably a good thing I live at sea level in a flat state.

At this point in the trip I’m fully aware that I can walk… and… I should keep it there. I’d love to do zip-lines like I did in my 30s, or climb through alpine towns carrying a child, like I did in Europe a few years ago. In my daily life at home, I’m used to managing my life with Vascular Ehlers-Danlos, but in these amazing parks, it would be easy to put myself in a position doing something that less healthy looking people can do. I look healthy, but I have the arteries of an 103 year-old chainsmoker. When we pull into a hotel, I usually take the kids to the pool so I don’t look like a schmuck as Monica lugs heavy cargo to the room. She and our son do the adventurous stuff, while I entertain our daughter – a strategy that may hold out another year. On the plus-side, I’m getting some quality time with our little girl, and getting into a great book.

Oh. I forgot this gem from the Mesa Verde shower facility:

I’ve begun to observe that these two-night stops result in a lot of one-day park visits, and some big drives in between. Ghost Ranch and Mesa Verde recharged our batteries. The kids blew off some steam (and so did the parents.) An extended stay in Yosemite is on the horizon, but first we have Zion National Park to explore, and a few days to kill before following the footsteps of John Muir.

8 thoughts on “We boldly leave Santa Fe…and only make it an hour down the road.”

This was my pre-pandemic go-to. Weather is cooperating with their outside seating. #intermezzocoffee #edgedistrict #edgedistrictstpete #centralavestpete #dtsp #ilovetheburg
Big day for Monica. She completed her first Boston Marathon in a solid 3:35 and then scored access to Fenway Park for the playoff game (made possible in part by my flight to Boston with the kids getting cancelled!). Go Rays! #bostonmarathon #boston #fenwaypark #tampabayrays
Not a bad night when #theblackkeys play a club walking distance from our house. No, I didn’t really walk home, but I could’ve. #jannuslive #patrickcarney #danauerbach #stpete #ilovetheburgstpete #ilovetheburg #littleblacksubmarines #blackkeys
Meandering back home. About 15 years ago Monica and I went on a grad school trip to Chinsegut Hill. It is in much better shape today than it was the. #chinseguthill #brooksvillefl #thormotorcoach
Quick RV trip to a friend’s family farm. @maureenmcdole #floralcityflorida #wonderfieldfarm
I don’t think the prevailing winds allow @stpizzaburgh @mothergoosevillager @telwyn to smell this goodness. #smokedribs #electricsmoker
Loading Comments...
%d bloggers like this: