Just a few days into our trip, we had already made it to Tennessee. But then our itinerary took us east – and then east again. First, we made our way out of the Smokies to the town of Asheville, NC. I don’t know what Asheville is really known for, but my personal impression was that it offers a cooler summer climate for many people from St. Petersburg (where we live). Beyond that, I knew of its artsy reputation and the nearby Biltmore estate.

We rolled into town lugging laundry and smelling like five days of campfires (well – not Monica, who we learned gets squeaky-clean, even in the wilderness.) We tested the load capacity of the standard hotel luggage cart as we attempted (again) to keep things organized. (Would it be okay if I just start accidentally leaving things behind?)

Asheville has exactly what I require in a town: good food, good coffee shops, and a bookstore within walking distance. One highlight was the old Woolworth’s department store. The old soda fountain has been rebuilt to its former glory (where I chased a club sandwich with a banana split) and the rest of the store is filled with stalls of local artwork.

On our second night, we finished dinner at Rhubarb, which sources most of their food locally (I had a chicken named Colin) and walked around Pack Square, the center hub of Asheville where tourists pose for pictures while dreadlocked buskers toil beneath Civil War monuments.  We met Phil Krell, sitting cross-legged with an old manual typewriter in front of him and a suitcase with a sign offering “Poetry on demand.” We couldn’t resist. He asked a few questions, and within a couple of minutes, produced a wonderful personalized verse. (He did this on an old typewriter without a backspace-key while I couldn’t write this sentence without deleting things four times.) Check this out!

Poet Phil Krell (@travelinonpoetry) hammers out a work of art. The multiple plaques with Civil War names and World War I references confused us enough that we concede they aren’t celebrating the Confederacy. Well played, Asheville.

We finished the night spending an hour in Malaprops Bookstore – because we needed more heavy things to keep in the van. It is important that we foster good reading habits with our children. Naturally, they settled on books with almost no words: Where’s Waldo.

This would be totally uninteresting except the next morning at the hotel breakfast, the kids were “reading” their Waldo books, when the mother in the family next to us said that her “ex-fiancé” was once hired to travel the country and attend crowded events dressed as Waldo. (This was after I was mumbling about how much I hate searching for Waldo.) A few minutes later, ex-Waldo himself (in street clothes), arrived – overjoyed to see the kids’ choice of “reading” material. The kids acted as though they were meeting a truly famous celebrity. I was left wondering why the woman referred to her husband as her “ex-fiancé.”

We didn’t really give Asheville enough time to experience it thoroughly. We didn’t visit the Biltmore Estate this time. We’ve been before and it needs an entire day. But we had to boogie a little east. We stopped for lunch with Monica’s college friend and then went to see a very good friend of mine who I hadn’t seen in nine years. Last time we saw each other, neither of us had kids. We’ve since combined to create four little terrors. We met up at his family’s mountain house outside West Jefferson, NC, not far from Boone.

We spent a blissful three nights in beds we didn’t have to pay for, eating home-cooked food, and catching up. The kids had little friends to play with, leaving the adults to carry on (relatively) uninterrupted conversations. 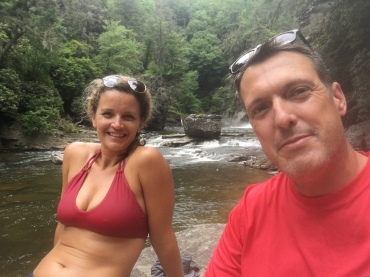 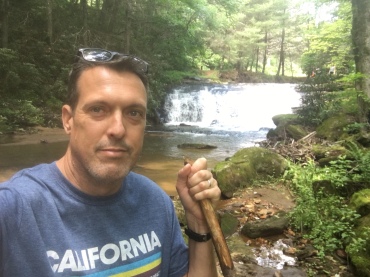 Little known fact: there is a short walking trail to a waterfall every 100 feet in the Appalachian Mountains. Right: Shortly after finding this walking stick, it saved me from a clumsy wipeout as I slid like a newborn giraffe down a wet rock.

Now you see them, now you don’t. Somehow I missed the action shot of them falling off the rock.

Top left: I’d love to go back in time and show this picture to our college-selves. Top left: Beware the family that busts out a karaoke machine. Bottom: She’s singing “Dancing Queen” to the back row.

Two weeks into our trip and we were still in a state with an Atlantic coast, and I was Jones-ing for the west. We had three days to make it to a hotel we’d already booked in Santa Fe, New Mexico. Some serious driving was in order. I donned my sexy compression socks (I had a DVT in 2016), and we pointed the hood of the van toward the setting sun. It seemed to take all day to make it over the mountains and hit I-40 – but we pushed hard and managed to make it to Memphis on Day One. I think we ate in a Cracker Barrel, but I was so delirious from the drive I can’t remember anything past 4pm.

Looking at the map, our options for a place to rest on Day 2 of the drive looked pretty grim. Amarillo, Texas was a stretch destination, and coming up short looked dicey with few towns. By midday, it was clear that Amarillo wasn’t in the cards. Monica whipped out a USA atlas compliments of AAA, and noticed a little state park in Oklahoma that held some promise.

In spite of my vow not to set up camp just for an overnight stay, we found ourselves sharing a beautiful canyon with a just a few other quiet campers. Red Rock Canyon State Park offered the kids a chance to run around after two days in the back of the van. Monica took a run, and I got to stretch my legs in a place that sheltered Plains Indians and (later) 49ers heading to the California Gold Rush.

The evening breeze died down and the canyon got a little sticky. Fortunately, we carry a fan that runs off 8 D batteries to move the air in the tent. 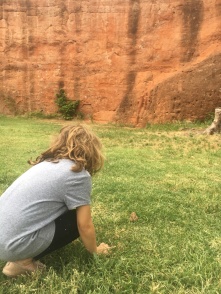 Left: I often wonder if those amazing campsites I see on Instagram are staged, and then we fall into this gem for $14 for the night. Middle: Monica went for a run, taking along a whistle in case she got lost. Right: The kids found frogs and rabbits, leaving us to wonder if only hopping animals survive in Red Rock Canyon.

All that remained was the last stretch to Santa Fe and the western portion of our trip would be begin.

5 thoughts on “Asheville to Nashville to Oklahomashville”