Our first true destination of the trip (with apologies to my in-laws) was Charleston, South Carolina. In spite of  having lead tour-buses of silver-haired guests from Key West to Gatlinburg, Monica had never been to Charleston. My best friend Dan used to live in Charleston so I’ve visited a few times. But I confess that Dan and I spent less time riding in horse-drawn carriages and touring old homes than we did bar hopping, so I had missed much of what makes Charleston great.

Rather than recount every site – because that’s what Fodors is for – I’ll summarize our visit in broad strokes and later in this post you’ll learn a major parenting “hack” that is guaranteed to change your life.

But first: Charleston’s old neighborhood adjacent to White Point Garden is one antebellum home after another. Any one of these houses would be the most historic home in 95% of the rest of America. Plaques in front of every other house, mundanely read:

“Here at Winsome House, Col. Rev. Nathaniel Beauregard Rogers IV M.D., almost-signer of the Declaration of Independence, organized a rebellion against British forces massing outside the city. During his daring mission to warn the colonial militia, Rogers freed 21 enlsaved workers who then fled to Canada. Rogers’ grandson fought under General Robert E. Lee before opening Charleston’s first free hospital, putting an end to the Yellow Fever epidemic of 1874. The family also invented the tetherball in the courtyard.”

You get the idea. You don’t have to look far to find some remarkable history. I mean… the highways are laden with dedication signs. Not lying: I saw a guy waving a campaign sign on the side of the interstate at an interchange named for someone with the same last name. 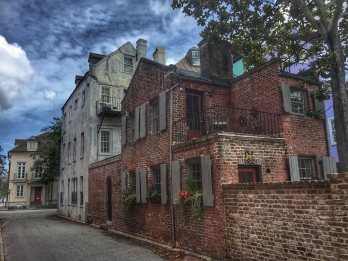 Top left: Charleston homes date back 300 years. I’d love to see how today’s stucco suburbs look after three centuries. Bottom Left: The waterfront at White Point Park, a cannon’s shot from where the Civil War started. Right: I only made it in to one picture. Monica and I have realized that we really just want to sit in cool coffee shops in old buildings.

You haven’t really been to Charleston until you’ve visited Ft. Sumter. Everyone knows that this is where the Civil War started, but I quickly realized that’s all I knew about Ft. Sumter. The southeast and gulf coasts of the United States are dotted with old forts, but very few have seen much action in all those years. Ft. Sumter was bombarded relentlessly during the Civil War and the story is well told. The fact that it was updated and manned during the WWI and WWII is not covered in 8th grade history books.

Our son got to help raise the flag over the fort.

After a couple of days of getting dragged around the city, the kids were getting a little edgy. While Monica and I longed to duck into a trendy “fusion” restaurant for something served on “toast points,” the kids wanted to hit every candy shop and chocolatier in between. Eventually their frustration and fatigue manifested itself into bickering. (Stop touching me. I didn’t touch you, you touched me. Ouch. Mommyyyy.) At some point, I had a stroke of brilliance. I wondered how our son’s second grade teacher managed 17 eight year-olds yet I wanted to abandon the two children in my care. So we instituted her system of daily discipline…

In a nutshell, they start the day at letter S. If they are good, they can “clip up” a letter. (There are clips involved in the classroom, which means we are sworn to this nomenclature.) If they are bad they “clip down.” In the past, I’ve threatened to throw all of their toys away, but I’ve never seen a reaction like the threat of “clipping down.” We dangle rewards if they finish the day on E, but it seems that the mere status of the letter is all they care about. And at the end of the day, it’s over and they start the next day at S again. It makes no sense, and it works (we’re 7 days into this system as of this writing and still going strong.) 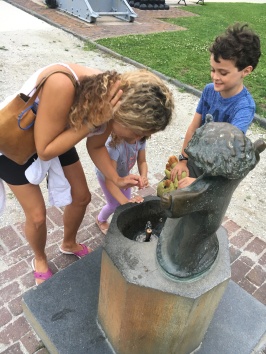 Remnants of a city built on the use of horses are everywhere, such as horse tying posts and the carriage step pictured above. I’m pretty sure this very low, always running drinking fountain with a deep bowl is not for human use. But I could be wrong. 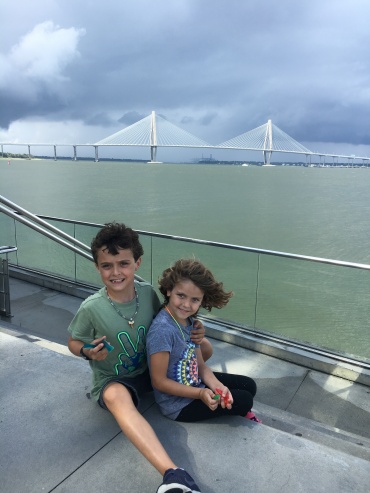 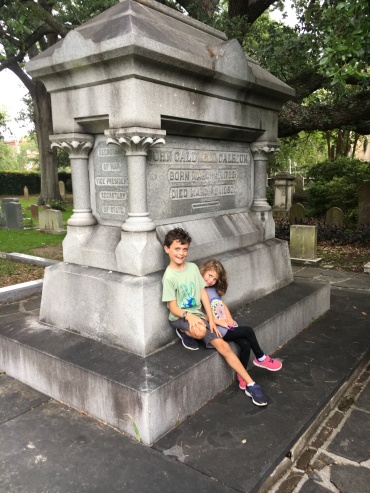 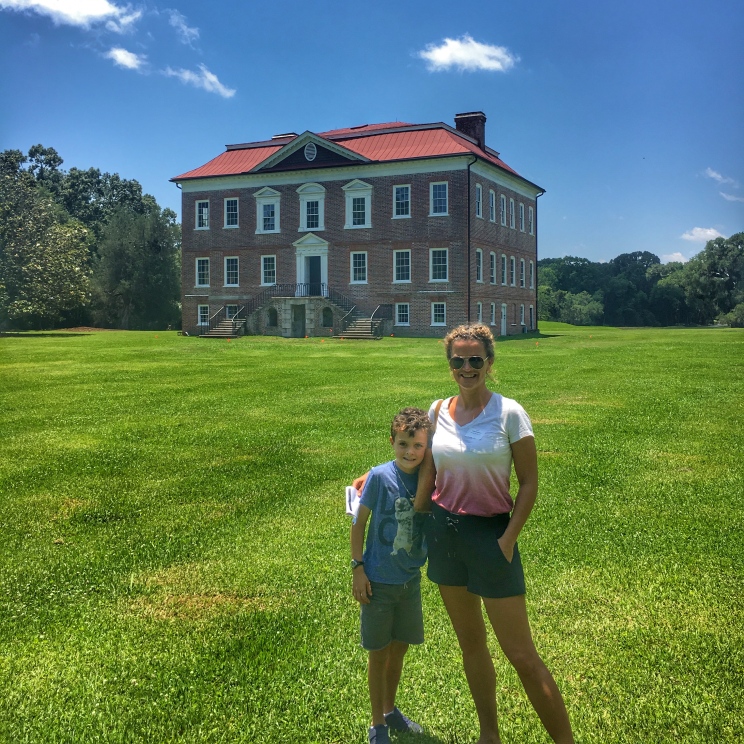 Top left: You may have heard that Monica is training to run the NYC Marathon on the John Ritter Foundation Team. While she ran 6 miles across the Arthur Ravenel Jr. Bridge and back, I’m training to entertain the kids while she runs long distances. Top right: Look kids! The grave of Vice President John C. Calhoun! Bottom: Drayton Hall Plantation shows a plantation without the period dressings. Bare walls, and no furniture show how the house was left when the family sold it to the National Trust for Historic Preservation.

4 thoughts on “In Charleston: Winning the first battle against the Rebels (children) at Ft. Sumter”