Before we had kids, before I had gray hair and before Monica stopped telling me how much our hotel rooms cost, we visited New York City a couple of times a year. Lest that sound bougie, it was the only place we visited frequently (perhaps that’s morebougie).  We’d cash in our credit card rewards for a free JetBlue flight and run around Manhattan for a weekend trying not to stick out like the tourists we were. We even honeymooned in New York. 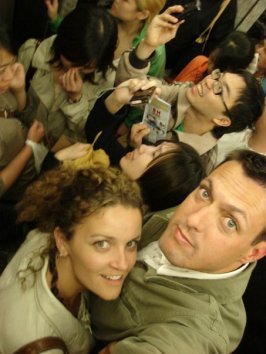 A younger version of us, crammed into an Empire State Building Elevator. Me, looking glorious, ending a late night with a pastrami sandwich as large as my head.

We’ve gawked at LL Cool J getting out of a Bentley, passed Woody and Soon Yi on an Upper West Side crosswalk, and we’ve unexpectedly run into friends at least three times. We’ve stayed Uptown, Midtown and Downtown, and never left disappointed. Since having kids, we’ve managed to make a few trips, but had to skip the Broadway shows, and got sideways glances when we pushed a giant garage sale stroller into a courtyard wine bar that had once welcomed us. High end strollers are a status symbol in parts of Manhattan where people don’t own cars. Rolling up with that Cheerio encrusted plastic beast was the equivalent of handing over our 2002 Ram Van to the valet at Le Bernardin.

For Valentines Day this year Monica and I agreed not to get each other presents. Naturally, I followed the agreement, and she booked us a surprise trip to the Big Apple. In the past she’d managed to get some really good hotel deals, so she didn’t really want to take a step back in accommodations. The problem is that in the past we’d visited during the Wall Street collapse, the Swine Flu epidemic, and Ebola. Great times to get a travel deal!

This, my dear readers, is how the other half lives. You too can afford this room, during a global plague. Our “room” at the Waldorf Astoria had an entry, living room, bedroom, room before the bathroom where fancy people dress, and two bathrooms.

This trip would be my first visit post-VEDS, and I’ll admit, I was a little nervous about how exhausting being a tourist in New York can be. The walking, the stairs, the luggage, and the wear. Fortunately, our kids are finally at a stage where they can sherpa some gear. No more strollers, car seats and diaper bags. This was particularly important since our effort to avoid baggage fees had us lugging 8 individual pieces of carryon luggage: 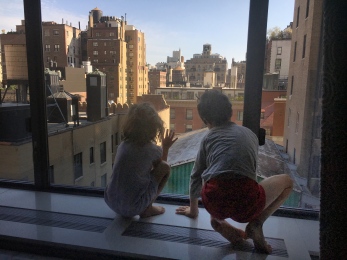 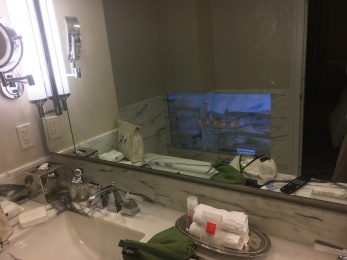 We brought parfait ingredients through the airport like we were transporting a human organs. It was a stroke of genius, as our first breakfast was a pair of parfaits that would have cost us $18 each from room service. And, no, it’s not an illusion, there’s a TV inside the bathroom mirror. Because, they can.

I won’t get into every detail of our sightseeing trip. We had one day of amazing weather where we enjoyed Central Park (I saw Chef Eric Ripert of Le Bernardin walking to work, keeping our celebrity sighting streak alive), and explored the Upper East Side. Day two brought rain, but it didn’t stop us from showing the kids the Brooklyn Bridge, zipping through Grand Central and hitting the New York Library. We took the kids to Sardis and saw Anastasia on Broadway (they loved it).

For me, I just paced myself. I took a nap on the second day while Monica went shopping.  Long ago, I stumbled upon this killer backpack made by Keen Footwear. It has a stiff hidden flap that folds down into a seat, and the pack becomes a backrest for resting on the ground during a day-hike. It’s brilliant. I’m 6’3″ and I’m like a giraffe sitting on the ground. This backpack isn’t the most comfortable thing to wear, but it’s an awesome seat. Last year, I tried to buy a second one, because we were always fighting over it. They discontinued it, but I found one on eBay. I only tell you all of this because I need to justify why we have matching backpacks. (It’s a hangup of mine: I don’t do matching shirts, I don’t do same-side-of-the-booth. I can’t even order the same meal.) 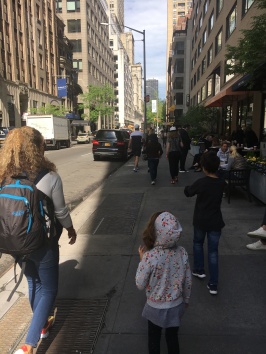 It’s hard to tell in the pic on the left, but I’m using the backpacks as a seat. At right, you see it’s a normal backpack when carried. Keen Footwear has paid us nothing for this review. But if they have any more sitting around, our kids each want one. 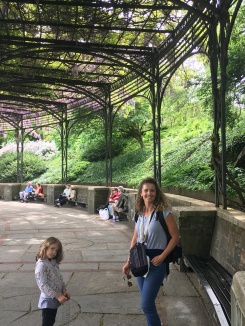 “Son, tell us how you feel about Trump.” While everyone else is clamoring for a pic with Alice in Wonderland, we take our picture with Hans Christian Andersen who – according to my grandfather’s very detailed family tree – is a distant uncle of sorts.

Our biggest indulgence this trip (since I have not been informed of the price of our hotel) was having the hotel hire us a babysitter for a few hours on our second night. It was our ten-year anniversary, and when you stay on Park Ave, the hotels will slaughter a penguin for you if you ask them to. Luckily, we don’t wear penguin fur. But we do have two kids and the hotel uses a reputable service, used by people whose children would actually command a hefty ransom. Honestly, it was 4x the cost of a high schooler in our town, which isn’t too bad. A nice older lady arrived with a backpack full of art supplies, and we were emancipated.

We took the opportunity to walk around the Upper East Side, have dinner, and do what Monica came to do: stalk the bar at our hotel for Tom D’Agostino. Who? I’ll explain: The bar at the Regency is – for some odd reason – the hangout of a guy who was briefly married to Countess Luann from “Real Housewives of New York City.”  (Feel free to read that sentence again.) He was famously photographed kissing a woman at this bar while his soon-to-be-wife was in West Palm Beach prepping for their wedding. Or so I’ve heard. I’ve never seen the show.

Alas, Tom wasn’t there. But we did find that the bar was populated by other Real Housewives fans, as the pair of twenty-somethings sitting next to us were on the same mission. Brandon and Brittney, you know who you are.

Our summer trip starts in a week! Make sure you’re subscribed so you don’t miss out on the many valuable lessons we’ll learn the hard way.