The other day Monica asked me, “Do you plan to use packing cubes while we’re on our trip?”

This was not really a question. This was a subtle suggestion. When she asked, she was standing in the luggage aisle at Target where packing cubes were on sale. Monica loves packing for a trip almost as much as she loves taking a trip. Less than a month until we leave, she’s begun to enter the packing euphoria. Today I caught her using surplus packing cubes in her sock drawer.

It’s all about efficiency. She packed for Europe last year with two pairs of pants, which is two more pants (or shorts) than she packed on a visit to my in-laws, since dubbed Pants Free Weekend. She likes to pack light.

Prior to a big trip, she goes on the prowl for items which maximize utility and space. She should work for NASA. Before we went to Belize (back when we were youngsters), she bought what amounted to a boating/fishing shirt – something she’s never worn at home. But in Central America, it was a shirt/jacket worn almost every day of the trip. I’m not criticizing, I love the thing. I haven’t seen that blue fabric in almost a decade, but I suspect it’ll come out of retirement for our summer journey.

Speaking of blue shirts: My closet is full of nothing but blue shirts and it’s become a problem because with jeans I’m toeing the line of doing “double denim,” which can’t be worn properly by a dad over 40 (or most other people). In my quest to outfit myself properly I took myself to Steinmart because it is the store geographically closest to my couch. I tried on a bunch of un-blue shirts and quickly settled on a red-plaid short sleeve button-up from an outdoorsy brand. It apparently hit the same sweet spot as Monica’s blue shirt because she said it was too “lumberjack” for everyday wear, but perfect for our trip. 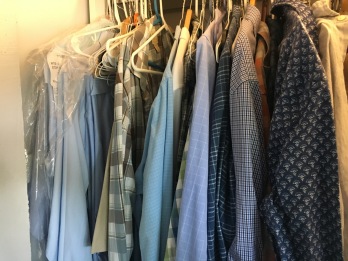 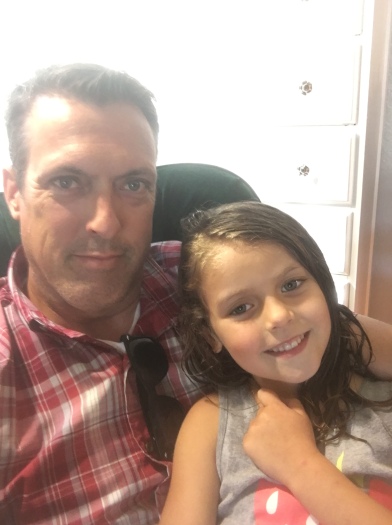 Monica, using packing cubes in her dresser. Isn’t a dresser already a set of wooden packing cubes? My blue shirts will have to make room for my lumberjack look. Perhaps I’ll leave my razor at home and grow a beard so that I can look the part in the Pacific Northwest.

This brings me to something I’ve observed living in a city that is a vacation destination. When people go on vacation they make fashion choices they would never make in Peoria. It’s usually a Panama hat, or a bathing suit with extremely complicated straps. For me, it was a pair of white linen pants that I once purchased before a cruise. As if I was going to be dancing in Cartagena like Michael Douglas in Romancing the Stone. To my credit, I never wore those pants, but they taunted me from my closet for many years.

Since Monica left an office job and took up freelancing, yoga pants have been multiplying at our house. Will their small size and comfort earn them a place in the packing Pantheon? That remains to be seen. Monica has spent many hours recently in the gym, and not that she typically needs an excuse to go shopping, but she’s even more enthusiastic these days.

A few weeks ago, a new shop featuring vacation-wear opened near us so we decided to pop in. The name of the store is “Nautigirl Beachwear.” It’s a clever name, even if it isn’t a fetish shoppe for boaters. The owner was super friendly and before long Monica had about a half-dozen bikinis to try on. They have a men’s section too, which is great because it reduces the awkward standing around that guys do in other stores.

Women complain about bathing-suit shopping, and Monica is no exception. She dreads it like going to the dentist. (Actually, she raves about her dentist.) We must have caught her in an especially good mood because she went into the dressing room with enthusiasm. She tried a few high-cut hip, low cut chest, one-piece suits that (not-pictured and unfortunately not-purchased) looked incredible on her, but were more appropriate for Burning Man, and not burning marshmallows. But she did find a handful (no pun intended) of bikini tops that looked great and stand a chance of staying on while paddling and swimming.

Then there were the bottoms. Apparently, the current fashion is very small bikini bottoms. These look practical in magazine ads, but don’t always translate in real life. Monica tried them on, but she wasn’t going for the itsy-bitsy-teeny-weeny bikini bottoms (again, not pictured). 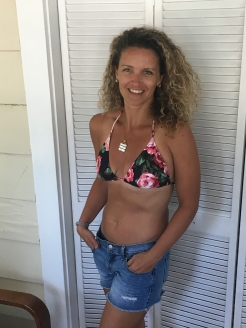 Here Monica models sensible summer wear and reveals that the blue shirt has no expiration date. 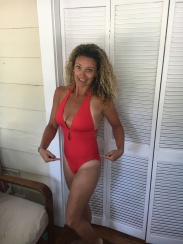 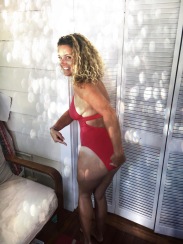 Next we find her “American Gladiator” look, as she shows off that this top can be worn not one, but two – that’s right TWO – ways. And finally, the va-va-voom sexy one-piece proves that practicality and function are sacrificed in order to look like Bo Derek in 1979. No, she’s not disco dancing, she’s pointing out the tan lines.

I’ll conclude by noting that followers of this blog are going to see the same clothes over and over this summer. That is unless, we become so popular that we are anointed “influencers,” (a term I learned recently) in which case I expect companies to send us free swag. If you catch me wearing linen pants or a funny hat, they were free.

Never miss a post by clicking the FOLLOW button on the right! Do it now! We also have a public Facebook page. Be sure to “like” it for more pics that don’t make the blog, and post updates. Instagram is linked to this page. If you don’t see it, you’re not looking hard enough.