A little housekeeping before we get to the post: We now have a public Facebook page for Don’t Make Me Turn This Van Around. Be sure to “like” it for more pics that don’t make the blog, and post updates.

This is Part Two of our three part, mega Spring Break chronicle, which came with a lot of last minute planning. In Part One we scrapped our original plan and hit one of the best campgrounds in the state for the first two nights. We tried out a new bed situation and survived a squirrel invasion.

After two nights, we pulled up stakes at Fort De Soto and headed east for our second destination: two nights at Jonathan Dickinson State Park. Again, we managed to grab a site by checking several different parks repeatedly until we found a cancellation. If this hadn’t worked out, we planned to stay somewhere in the Everglades, which in hindsight might have been a bad idea due to weather bringing out mosquitos and other insects that don’t realize that climate change is just a Chinese hoax.

Stories we heard about a beautiful river and excellent canoeing were true. I was struck by the size of the park, a vast expanse of palmettos and pines that reminded me of pictures taken by the great Florida photographer Carlton Ward. Interrupting the sandy expanse is the mangrove lined, brackish Loxahatchee River, which empties into the more famous Indian River. If you’ve driven into Florida from the Georgia, you’ve seen “Indian River Fruit” billboards, rivaled in number only by Ron Jon Surf Shop ads, and the vasectomy guy, who – I can attest – is a master of his craft. This park appears to be well funded, and vibrant, with the help of a separate non-profit, the Friends of Jonathan Dickinson State Park. The facilities all seemed new, nice showers, marina, concessions, horseback riding program, observation tower, boat rentals, and knowledgeable rangers (one of whom gave my son a bag of frozen bait). I hate to say how much we enjoyed this park for fear of word getting out.

We were greeted with a perfect offshore breeze keeping the no-see-ums at bay. If you aren’t familiar with the no-see-um, they are as they sound, hard to see. No-see-ums aka Ceratopogonidae, or biting midges are microscopic insects, small enough to pass through most tent screens. You can’t see them in flight, and you can barely see them as they deliver a surprisingly irritating bite for such a little guy. To make matters worse, DEET has no effect on them. When I moved to rural Florida in 1989 (from California, where there isn’t enough water to sustain insect life), sweet little Avon Ladies from the church were championing Skin So Soft as a no-see-um repellant. Sweet little old Snake Oil Sales Ladies peddling hope and lies. Skin So Soft is just a nice marinade to Florida’s wide array of blood suckers. According to the internet the only thing that will keep no-see-ums from bothering you is extreme drunkenness. You still get bit.

Jonathan Dickinson State Park is named after the man who famously shipwrecked there in the 1600s with his family and was tormented by the natives. As elusive as the fabled Skunk Ape of the Florida swamp, here is a photo of Monica washing dishes. (She reminds me that the purpose of the picture was to show how we used the little pink baths from the maternity ward as wash/rinse buckets. Hipsters would call this a “hack.” We call it practical.)

The same breeze that kept us comfortable with our campfire smoke reliably trailing west, also made paddling on the river more of a challenge. The ranger sized up our family and suggested that we take a 16 foot motor skiff to explore the river (for the same price as two canoes). This was one of the highlights of our trip. My level of motor-boating experience (involving actual motor-boats) would classify me as “less than novice,” yet I handled this little vessel like I was born on a muddy river bank, deftly docking it with nary a bump. I’m either a natural pilot, or it’s really easy to operate. 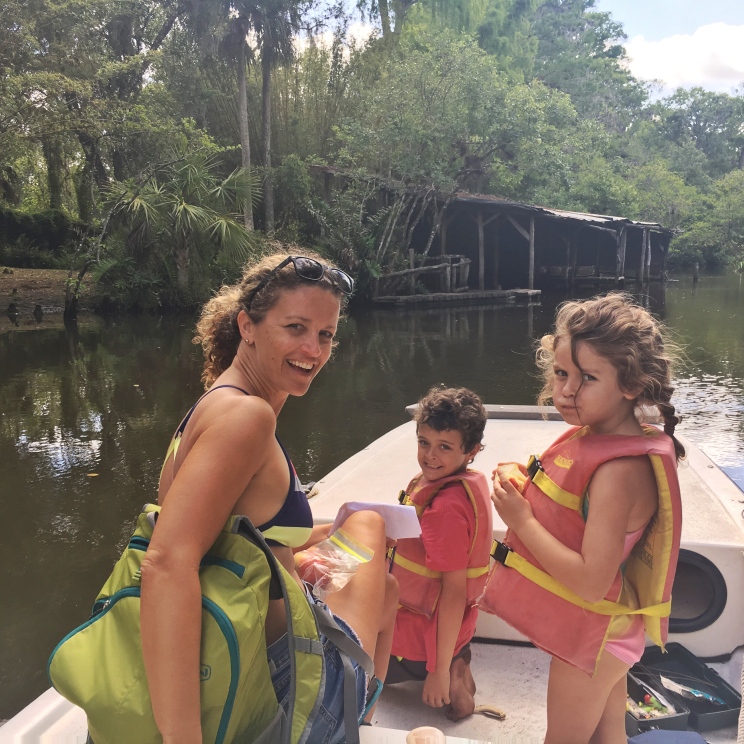 The River Campground is small, and there was nothing between us and the Loxahatchee but saw palmetto and pine – habitat for endangered scrub jays. We motored up to Trapper Nelson’s camp, a historic site which tells the story of an early Florida entrepreneur with a colorful life and mysterious death. Back at the docks we dropped in our fishing lines while Monica mimicked the damsel from the Black Lagoon.

Perhaps it’s because the state has been strafed by multiple major storms, but all the facilities we encountered were either new, or newly remodeled. Not one patch of chipping paint. It’s pretty remarkable given our state legislature’s eagerness to fund nothing and develop every patch of open land. (Did he just get political?)

Nothing beats bacon, coffee and a beautiful view. Within the park is the highest point in Florida south of Lake Okeechobee, complete with observation tower. I included this picture only to highlight one of the state’s wealthiest zip codes, Jupiter Island, in the distance. That white spec over her left shoulder is a yacht.

I mentioned that the water here is brackish, and the levels rise and fall with the tides. This will impact your visit in a couple of ways. First, you can’t take a boat out at low tide. Second, it’s just fresh enough to be a great place to spot alligators. As a kid, I swam in the Suwannee River, and our rule of thumb was to toss some rocks and splash along the banks a bit to scare off the gators before jumping in the river. Out of sight, out of mind. Here, the signage may be affecting the popularity of the swimming area:

Aside from alligators (which we did see), we were told to keep an eye out for manatees and otters. Personally, I’ve only seen otters in the wild a couple of times, and I know you really need to be paying attention to see them. Manatees are a little easier certain times of year, but we didn’t see any on this visit. The thing that was great about this park, is that we would have enjoyed it just as much in cooler weather, which makes it an easy place to plan ahead to visit.