Man cannot live by bread alone; he must have peanut butter. – President James A Garfield

My family recently set foot inside a Bass Pro Shop for the first time. “This is a lot bigger than REI,” my wife said, as we walked into a building that could probably contain all REI locations combined. Our son marveled at the live gar in the massive aquarium and our daughter climbed on a 4-wheeler. Why spend $1,000 at Disney World and leave numbed from exhaustion when you can spend $1,000 at Bass Pro Shops, have fun, and leave with tons of cool stuff!

We were there specifically for the tent that I decided that we needed based on hours of online research. (More on our sweet tent in another post.) Of course, like Target, you don’t walk in for one thing and walk out with one thing. But there was one other thing that Monica had to have. A Dutch oven.

I’m the main cook in our house, but I’m not a baker. I grab ingredients, some olive oil, and start throwing things in a hot pan – and when in doubt, top it with either soy sauce, cheese, or butter. Monica makes and decorates the birthday cakes (never store-bought), muffins, tarts – she loves to bake. A heavy 10-inch Dutch oven made its way into our cart. And no, officer, I did not see her taking pictures of pages in that cookbook we didn’t buy.

Before I tell you what happened next, I should tell you about my first experience with a Dutch oven: I’m a college junior heading on a camping trip wth a bunch of friends from Florida State – in my buddy’s parents 1980s conversion van – which had a poker table in the back. Being from Florida, we decided, “Hey, lets go camping in North Carolina in January!” We arrived to the top of desolate hill, well after dark, and were greeted by balmy 19F temperature and a stiff wind. Starving.

A fire was quickly built and we threw a bunch of meat on and had feast… right? Nope. One kid, who’d spent a monthlong internship with the National Park Service and fancied himself an outdoorsman, insisted on making a peach cobbler to satisfy 4 men and two women (yeah, we knew girls too). Ninety minutes later we were presented with a dinner a half raw – half burned – pot of canned peaches, unmixed batter, and curdled egg. We promptly cut him up, ate him and used his carcass to keep warm.

One fine Friday night, she decided that if we plan to use this Dutch oven on our summer trip, we’d better get some practice.

Soon, there was lots of flour and other catalysts flying all over our kitchen. Words like folding, proving, punching, and setting were being used with definitions found deep in their dictionary entries. Making bread has a lot of steps, the most difficult of which is the waiting. Did we wait long enough? What is the room temperature right now? And humidity? Should we wait longer? Did we wait too long? If you want bread at dinner, you don’t start at 4pm.

As the dough proved… or proofed… whatever…  As it sat around getting bigger, we decided that we had enough dough to make one loaf of bread in the kitchen oven, and one in the Dutch oven over coals in our back yard. We turned to YouTube for some guidance and found a historical re-enactor – dressed like Paul Revere – showing us the process, using only tools available to early settlers… and a digital probe thermometer.

Somewhere along the way, the bread in the Dutch oven became mine, and the loaf in the oven was hers. Using a combination of leftover firewood, charcoal, and old tax returns, I made a good hot fire. It was a beautiful evening. The baking process was to take about 40 minutes. Bake! 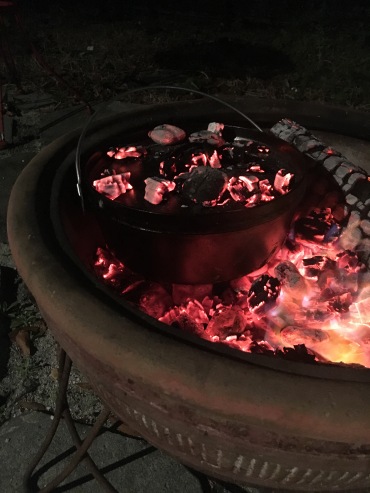 Now, I knew this fire was too hot. I’d read that we needed about 13 coals beneath the oven and seven on the lid, so I just put the thing in what appeared the be the coolest side of of the pit and gave it a quarter turn every 10 minutes so it would bake evenly. And then, yet a again, we waited.

Paul Revere said, “Don’t peek at the bread too much, you’ll let all the heat out.” So I didn’t.

And I can’t say I was shocked at the finished product. Monica turned out a perfect golden-brown loaf of delicious bread. So good, our son ate it. And I produced an evenly baked frisbee-sized hockey puck. The smell was horrendous. Had we been starving in a bivouac on the face of the Eiger in the Swiss Alps, we could have each shared a few bites. But we weren’t clinging to the edge of a mountain with no hope of rescue. We were home on a mild winter evening. The burned bread went back into the pit where hot coals failed to destroy it. It could have been used by NASA to protect spacecraft during reentry. Monica’s loaf became breakfast.

I love the idea that someone might Google how to bake bread in a Dutch oven and stumble upon this useless article.

A day later, I took my son camping with his Cub Scout Troop. The leader set up large Dutch ovens and made two massive peach cobblers. The kids gobbled it up so quickly, I didn’t even get to try it.

“Don’t Make Me Turn This Van Around” is written by Jonathan and Monica Kile. Check out Jon’s periodic column, “So How’s That New Book Coming?” at Creative Loafing – Tampa. His 2014 thriller, The Grandfather Clock, is available free for Kindle on Amazon.com and other eReaders at Smashwords. Reach him at jkilewrites@gmail.com. Monica is a freelance grant writer, non-profit consultant, tour guide, and connoisseur of 70s rock lyrics.