When people learn that we bought a 2002 Dodge Ram Conversion Van, they give me a strange look and ask, “How did that come about?” What they really mean is, “How did you convince Monica to let you buy a conversion van?” And the fact is: She picked it! When our Toyota Sienna Swagger Wagon got smashed for the third time (none were her fault) we began discussing what sort of versatile vehicle would replace it – because we were planning to use the minivan for an epic two-month family road trip.

First, she thought big. Luxury. Mercedes Diesel Sprinter van. Some good friends – former “Overlanders” who drove from D.C. to the tip of South America in a Toyota Forerunner – had just bought a used Sprinter and were beginning to outfit it for camping. We had “Sprinter Envy.” Sprinters are a hot commodity, and I just couldn’t picture my wife parallel parking something so large (she has a tendency to bump into things). She might claim that I’ve popped two tires hitting curbs in our neighborhood, but there were no witnesses. Once reality set in, we started looking at “poor man’s” Sprinters: aka the funny looking Ford delivery truck, the Transit. But there aren’t many used Transits to be found – particularly ones with back windows. Apparently it wouldn’t be kind to our kids (8 & 4) to take a two month road trip in a delivery van with no windows. (Look kids! The Grand Canyon! Aw, you missed it!)

As our options dwindled, I figured we’d end up with another minivan, but Monica wanted something roomier, and without the social stigma of a minivan. And let’s be clear: Monica finds a way to get what she wants. (Conversion vans don’t have a stigma, do they?)

She turned to the dreaded Craigslist. Actually, that’s not fair. Craigslist has rarely failed us. But I dread it because every time we’ve sold something on Craiglist, I’ve been inundated with inquiries from people who clearly don’t understand the concept of Craigslist. For every legitimate buyer, there’s someone who reaches out just to complain that it isn’t quite what they want, or lament that they live too far away. I’ve had people email me and tell me all the things they would do with what I’m selling – with no intention of actually buying it. Gee thanks.

My friends, you’ve not truly lived until you’ve gone to Craigslist and typed in the words: “Conversion Van.”

It’s the equivalent of asking for a kidnapper, right? It’s a handy way of finding registered sex offenders. I’m fairly certain the query automatically entered our names, email addresses, and DNA into an FBI predator database. 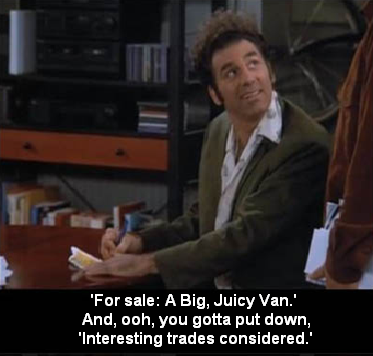 There are two types of people: Those who would never, ever consider driving a conversion van, and those who would. If you had asked me to bet my life savings, I would have put my wife in the former category. She went to Catholic school, she was in the best sorority in college, she has no tattoos, and she has a master’s degree. Now, she’ll be mad I told you about the sorority, but I have to mention it because she may be the first Delta Gamma, not from the 1970s, to own a van with seats that fold down into a bed. You don’t need a boat to have “captain’s chairs.” We have a friend (a college Dean no-less) who once traded an old Mercedes for a conversion van – without asking his wife! And we ripped him mercilessly about it. Now, we were in the market for one.

Her love of 70s rock should have tipped me off that my wife is a van conversion kind of woman.

So I didn’t meddle in the search. I knew that we would buy whatever she decided on. In short time, she found one. A 2002 Dodge with… get this… just 17,000 miles. The interior and exterior were as pristine as the few miles it had accrued. The owners had managed to keep it in their garage or under a cover for its entire life – saving it from the cruel beating of the Florida sun.

Alas, there was a buyer ahead of us. Someone out of town with a sad story about a son with disabilities, and they were coming with money in three days. So close. Disappointed, we bid the owners goodbye, with their promise that they’d call us if the deal fell through.

In the meantime, the search continued. We found a GMC Safari (a Chevy Astro with what GM considered to be a travel package). It was smaller than the Dodge, a bit better on gas, the mileage wasn’t too bad (under 80K) and it was cheaper. Definitely not as luxurious. We met the owner, who turned out to be a young salesman at a new-car dealer – and apparently moonlights as a used car salesman. He bought the vehicle when it came to them as a trade-in. His keen eye saw that he would pay more than the dealer, and he’d flip it for a quick profit.

On the surface everything looked good. Until we started opening doors. The back doors didn’t respond to the automatic locks… okay, one little blemish. Then we took it for a spin. The first thing I noticed was the emergency brake and ABS warning lights were permanently illuminated. He assured me that sometimes they turned off – which to me seems worse. Who tries to sell a vehicle with a bunch of warning lights illuminated?

Then I asked him to open the hood. Now, I’m not the most mechanical when it comes to cars, but before I got sick I was a top automotive oil/coolant salesman (yes, that’s a job), so I know WAY more than most people about the fluids cars require. The first thing I noticed was the coolant reservoir had no cap – just a gaping hole where any dirt, dust, and debris could get into the cooling system – which I pointed out was filled with water and not coolant. Why bother putting the cap on when you’re continually adding water from the garden hose?

But I digress. This guy was asking $1,000 over Blue Book, and I have a feeeeeeling… yep… several weeks later he’s still trying to sell it… 25% off.

There’s something sad about a car salesman who can’t sell his own car.

The next day was Thanksgiving, and my phone rang. The call. The behemoth. “Answer it! Answer it!” my wife shouted. I took the call outside. When I came back in, I tried to act crestfallen, but I couldn’t pull it off. The buyer had backed out, and despite a mechanic making an offer above asking price they wanted to sell us the van. They were genuinely sweet people who wanted to sell it to a family and apparently our kids made a good impression.

Twenty-four hours later, the van was ours. Having driven it for a few weeks, I must say that while I love to admire other cars, I’ve never really cared much about my own cars. Perhaps it’s because my first car was a used 1986 Ford Tempo that my parents gave me (presumably as punishment). The Tempo’s top feature was the many valuable (costly) lessons in car repair that its owners would inevitably learn. My first new car was a Saturn, which is about as nondescript as a vehicle can be. In more than twenty years of car ownership, I’ve never had a vehicle that was fun to drive. Until now. In the van I (mistakenly) feel the envy of other drivers and enjoy the (false) sense of power that comes with its V-8 engine. It’s like driving a Mustang and huge pickup at the same time.

We are booking campsites across America. We plan on spending the summer enjoying our nation’s treasures while threatening to take the kids home to enroll them in summer school.

“Don’t Make Me Turn This Van Around” is written by Jonathan and Monica Kile. Check out Jon’s periodic column, “So How’s That New Book Coming?” at Creative Loafing – Tampa. His 2014 thriller, The Grandfather Clock, is available free for Kindle on Amazon.com and other eReaders at Smashwords. Reach him at jkilewrites@gmail.com. Monica is a freelance grant writer, non-profit consultant, tour guide, and connoisseur of 70s rock lyrics.